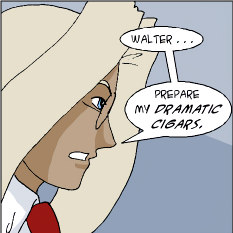 is a Hellsing fan web comic created by Erin Ptah, originally hosted on Comic Genesis. More humorous than its source material, Shine follows the Hellsing organization and others as they tackle problems such as parties, monster attacks, romance, paychecks, extremely aggravating fangirls, and those meddling kids.

and The Eagle of Hermes

Several AU versions of original characters created for the Shineverse appear in the artist's original comic, But I'm a Cat Person.

Besides many of the tropes found in Hellsing, Shine also provides examples of: 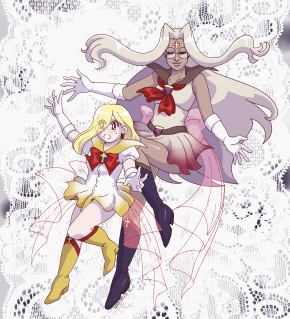 , which replaces the characters of Sailor Moon with the cast and setting of Hellsing.

A young Integra finds herself leading battle against vampires when her father dies, leaving her leadership of the Hellsing organization, while a talking eight-eyed dog called Alunacard gives her a crucifix pin that changes her into Sailor Hellsing. With the aid of Sailors Regenerator, Ghoul, Human, Vampire, along with the help of the mysterious Masked Vampire, Sailor Hellsing leads the Sailor Knights in the fight against the vampire menace while searching for the Master of Monster.

The Eagle of Hermes 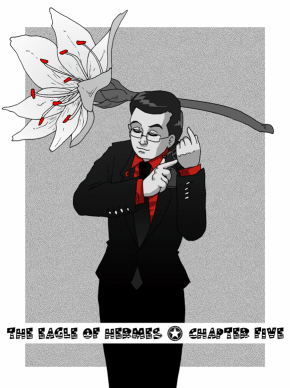 Every version of Stephen has a special relationship with his gun.
In additional addition to that, Erin has a third comic on DeviantArt and rerunning on the main site, The Eagle of Hermes

, a The Daily Show, The Colbert Report, and Hellsing crossover set in present day Shine-verse, with flashbacks to the Millennium invasion in 1999.

It's a story that asks one thing: What If? Stephen Colbert was a vampire?

The Eagle of Hermes contains examples of: