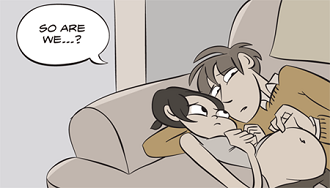 Anders Loves Maria is a webcomic by Rene Engstrom about the lives of Anders von Silfersked and Maria Holm, starting from the time they decided to have a baby. Take Finagle's Law, dial it up, toss in a Love Dodecahedron, and as a finishing touch sprinkle Swedish royalty on top. Began 9/11/2006, ended 2/5/2010. The website is currently under maintenance and cannot be read, though the pages are being redrawn and uploaded to tumblr here.