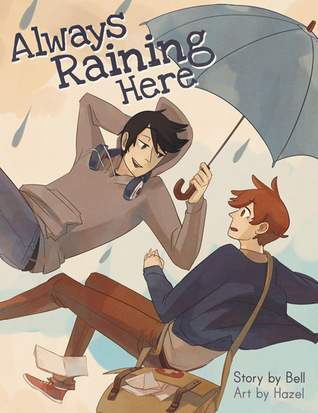 Always Raining Here is a Boys' Love webcomic about a teenage boy named Carter Brooks, who recently realized that he was gay, and Adrian Hlaváček, a theater kid that is the focus of Carter's unwanted hormones.

The first few pages start off during the 26th of March, 2011 with the two boys on the side of the road on either end of a pink bicycle. Dialogue is exchanged briefly before the first chapter actually starts, which explains the thirty-two days leading up to the opening scene.

For the majority of the first and second chapters, Carter does his best to get Adrian to sleep with him, using every method from flat-out asking him in a bookstore to installing a confetti cannon into Adrian's locker and stuffing hand-written notes into seemingly every crevice. To Adrian's disdain, his friend Maria is even encouraging Carter's desperation. However, Adrian is still getting over a past love - David - and does not appreciate Carter's advances, to say the least.

In the second volume, both decide to start over and begin again as friends. Carter decides to get to know him better and genuine feelings begin to develop between the boys as they spend more time together. They eventually become rather close, as Carter helps him in gathering props in theatre, hanging out together in the treehouse, texting each other for hours, eating pizza with their best friends Maria and Jason, watching the stars together, and playing video games at Adrian's house.

The first page can be found here.