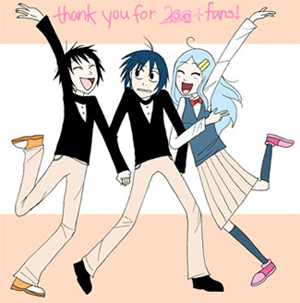 Let the insanity begin!
One of the most popular comics on Smackjeeves, Alternate

is a comedy that follows an Insufferable Genius named Skye McGregor who is determined to be the BEST. His goal goes untarnished until he encounters Xin and Bailey, a happy-go-lucky pair of best friends who seize Skye's plans of academic success and promptly proceed to screw it up. Add in a cult-like newspaper club to the mix, and Hilarity Ensues.
Advertisement:

The comic is by Nozmo and was updated for four years, but is now on hiatus on its third chapter. Also see her other work, Todd Allison & the Petunia Violet.