Webcomic / The Adventures of Aryan Boy 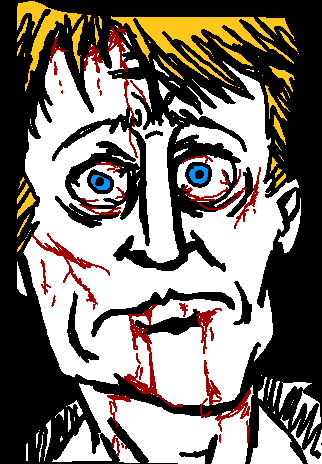 Into the Snafu truck!
"Here is presented a most curious chronicle, that of the noble young Aryan Boy, as he lives a life of intrigue, mystery, politics, romance and ethnic sufferings."

The Adventures of Aryan Boy is a webcomic, hosted on Smack Jeeves, detailing the political, ethnic, and sometimes painful shenanigans of the young and hapless Aryan Boy, a British blond-haired, blue-eyed Caucasian youth living in London with a slight admiration for Those Wacky Nazis. The comic features many compelling characters, such as the Nurse Killemly, aka Rich Oriental who acts as Aryan Boy's love interest, Aryan Boy's "conniving American" friend, Dixie Girl, his other American friend, the ex-marine Jersey Guy, and the enigmatic Clover Fascist, who also doubles as Medical Professional Dr. Helen Donov.

The story begins with Aryan Boy doing his daily studies on "/Pol/itics," when he is interrupted by the aforementioned Dixie Girl through Skype. She tells him an anecdote about an interracial couple she witnessed on a walk, which promptly horrifies his "Racial purity" obsessed self. Traumatized, he takes himself away from the computer to relieve his mind. He settles down with his favorite book, and proceeds to go Cycling. On the way, he notices a surprisingly beautiful, dark-haired woman on the campus of Roedean Independent School... who happens to be Asian. Incredibly conflicted in his attraction to her, he approaches the Oriental...only to be nailed to the wall with shuriken as a precautionary measure. Apparently, there's something suspicious about this Roedean place. After being mutilated and sedated, he gets tossed into a van and then thrown into a dark alley, covered in blood. Things proceed to go From Bad to Worse when the imposing, trenchcoat-clad Clover Fascist arrives and subsequently tortures the shit out of him. The rest of the comic is one giant SNAFU, with Aryan Boy getting tortured again and again, forced to commit acts of terrorism, and being betrayed by his own friends.

You can find it here.