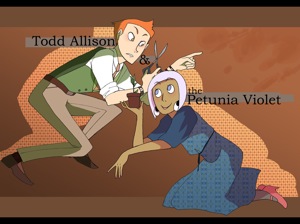 "I hate this city. And I hate all you stupid people and all the stupid things you do!"
— Todd Allison, who does not like Melbourne, Australia.
Advertisement:

Set in early 20th century Australia, Todd Allison is the next-door neighbor of Petunia Elkwood, a broke yet perky young lady. Petunia is oddly intrigued by Todd, and in fact refers to him as "the only interesting thing in [her] city". Todd asks Petunia to deliver a letter after the post office is bombed by the mysterious serial terrorist Violet; Petunia is followed by Todd to make sure the job gets done. And things just get progressively weirder and more awesome from there.

A webcomic by the hugely popular Smack Jeeves artist Nozmo, Todd Allison & the Petunia Violet combines "explosions, bombs, plant biology, chemical engineering, parties, pretty shoes and people swearing" into a beautiful comic worthy of all the fans it has. Nozmo is also the creator of the webcomic Alternate.

Historically, Todd and Petunia has a bit of a troublesome schedule. After it was picked up by Inkblazers (then Manga Magazine), Nozmo went on frequent hiatuses, some lasting a year long. When the company went down, it was picked up by Hiveworks. Nozmo maintained her schedule, until one day disappearing off the internet altogether. In 2015, after repeated attempts to contact Nozmo by Hiveworks staff, it went on unofficial hiatus during Chapter 17. The webcomic was archived by Hiveworks, but the site went offline at the beginning of 2017. Following the loss of the domain, it was also archived via the Wayback Machine here

As of November 2018, after three years of silence, Nozmo started updating Todd and Petunia again on its original host site Smackjeeves

, as well as revising some previous chapters and completing Side Story Two. The comic is back on Hiatus as of the end of Chapter 17, and the Smackjeeves version was deleted following the site's closure in December 2020. Luckily this version is also available on the Wayback Machine, seen here