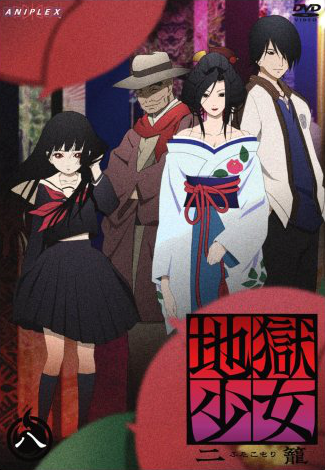 When one soul is damned, two graves are dug.
"It’s said life's encounters are governed by fate. Within the tangled threads of destiny cursed flowers bloom – pitiful and frail; lost in their anger, their sorrow, their tears. Beyond midnight's veil lies the revenge you could not exact alone."
— Opening Narration
Advertisement:

Schoolrooms all over Japan are abuzz with the rumor of the "Hell Correspondence" (Jigoku Tsushin), a mysterious website which can only be accessed at midnight. If you submit the name of someone you hold a grudge against, you will be visited by Enma Ai, the Hell Girl (Jigoku Shoujo), who will give to you the means to carry out your revenge — a black straw doll with a red string tied around its neck. To take vengeance, all you need to do is pull the red string off the doll, and Ai and her associates will send the target of your grudge immediately to Hell. However, this service is not without a price; as the old saying goes "when seeking revenge, first dig two graves" — by sending someone to Hell, you will have bound yourself into a covenant with Ai, and when you die, you will also go to Hell, as signified by the black fire symbol that appears on your chest once vengeance is served.

The first season introduces Ai Enma, the Hell Correspondence, and the series' episodic format. Each episode introduces a victim and an antagonist, and the circumstances surrounding them. As each story unfolds, the antagonists' actions push their victim further into despair, and it's only through the use of the Hell Correspondence that their victim can overcome their circumstances and send their tormentor to Hell. After the formula has been established, the series introduces a complication into the mix; single father and reporter Hajime Shibata notices the increase in the site's popularity and starts a personal investigation. Aided by his young daughter, Tsugumi, who has a mysterious connection to Ai, he tries to convince users of the Hell Correspondence not to complete the contract, generally making bad situations worse through his meddling.

The second season picks up a few years after the conclusion of the first season, and continues the established formula (minus Hajime and co.), this time telling each story from the side of Ai and her associates as they investigate and influence the circumstances in each case. This season swaps out the Black-and-White Morality found in most of the first season cases for a Black-and-Gray Morality, in which neither antagonist nor victim is really in the right.

The third season switches up the formula a third time, introducing a new third angle to the standard format, this time in the form of Yuzuki Mikage, who, through interactions with the victims and Ai's associates, is given the rare opportunity to watch her hometown and her entire life crumble around her courtesy of the Hell Correspondence. Amazingly enough, it goes further downhill from there.

The series as a whole is mainly a social commentary, using the Hell Correspondence as a tool to analyze and deconstruct the less appealing aspects of Japanese culture and society (there's even a Nice Boat-inspired episode in Mitsuganae). While many themes are universal, Values Dissonance means some storylines (like Mitsuganae's Wham Episode) are inevitably lost in translation.

The first season holds the distinction of being the only one aired on American television; IFC held the broadcast rights and showed episodes in varying timeslots.

There is also a manga adaptation, which shares the premise and core characters but follows its own storyline. The first series ran for 9 volumes, New Hell Girl for 3 volumes, Hell Girl R for 11 volumes, and Hell Girl: Enma Ai Selection, Super Scary Story for 13 volumes. A Live-Action Adaptation also exists, in series form; set within the timeline of the first anime season, retaining the anthology format while notably averting the anime storyline. At a mere 12 episodes, there wasn't much room for them anyway. Finally, the series spawned two video games, for the Nintendo DS (Jigoku Shoujo Akekazura) and the PS2 (Jigoku Shoujo Mioyosuga) respectively, as well as a puzzle game on the Konami-Net DX service for i-mode compatible mobile phones.

Eight years after the third season aired, a fourth was announced

No connection to Hellboy.