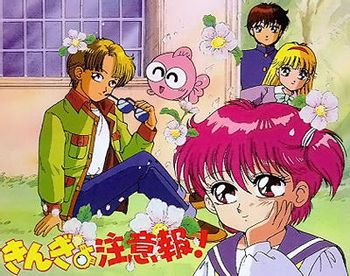 Goldfish Warning! is a Shoujo Manga by Neko Nekobe, which ran in Nakayoshi from 1989 to 1993. It follows the adventures of Chitose Fujinomiya, a snobbish young girl, who's been orphaned and impoverished by the death of her father. Thrown out of her exclusive, ritzy private school ("Tokaino Gakuen", a pun which can be read as "Big City High School"), she and her only remaining possession (a strange pink goldfish named "Gyopi") find themselves at Inakano Chugakko (another pun — "Out in the Country Junior High"). Inakano is not exactly what she's used to — it's dilapidated and farm animals wander both the grounds and the classrooms. Despite their rough manners, though, the students are good-hearted, and Chitose soon makes several friends (whether she wants them or not), including pink-haired semi-ditz Wapiko, good boy Shu and token delinquent Aoi (who despite their apparent differences all hang out together).

Then her late father's lawyer shows up, seeking to steal Gyopi. Gyopi, it turns out, is an extremely rare and valuable fish, and just about the only thing from the estate of Chitose's father that the lawyer hasn't already plundered. But the school's guard chicken (yes, guard chicken) catches him in the act and raises an alarm. He is caught and in the process drops a key to a safe-deposit box in which Chitose finds her lost inheritance — billions of yen in stocks, bonds, deeds and other documents.

With the money Chitose could return to Tokaino Gakuen, but instead she chooses to remain at and rebuild Inakano Chugakko. She then installs herself as head of the student council, and tries to "elevate" the school and its student body, while at the same time getting revenge on Tokaino. Most of the subsequent episodes deal with her efforts at sophisticating her classmates, and how her own snobbishness both sabotages her efforts and keeps her from enjoying herself the way her friends do.

This is a strange, high-energy series where the characters spend almost half their time Super-Deformed. Chitose plots and yells at people, there are a lot of random cows and chickens in almost every scene, and the principal of the school has antennae. If you don't expect things to make a lot of sense, but do like off-the-wall, slapstick-style comedy, you'll enjoy this show.

A 54-episode animated adaptation, produced by Toei Animation and directed by Junichi Sato, aired from 1991 to 1992. Both the anime series and its successor, Sailor Moon, aired Saturdays on TV Asahi at 7:00 pm.