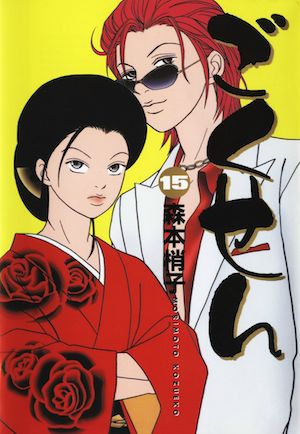 Kumiko and Shin.
University graduate Kumiko Yamaguchi's first teaching assignment is at Shirokin High School, an all-boys school renowned for being full of delinquents. She is put in charge of the worst class in the school — class 2-D. Fortunately, teaching and helping delinquents has always been her dream, and as she is heiress to a Yakuza group, she is more than equipped enough to handle any trouble a bunch of snot-nosed kids can cause.
Advertisement:

Schools aren't tolerant of gangs and people of dangerous backgrounds, so Kumiko's relationship to her yakuza family must remain a secret. Unfortunately for her, there is one extremely smart and disgruntled Bishōnen in her class full of idiots, Shin Sawada. He sees through her very poor cover-up and realizes that she is an Action Girl. His demands for a fight are mocked by Kumiko, after which Shin's respect and passing interest only grows.

Throughout the rest of the series, Kumiko wins over her originally mistrustful students and improves their lives for the better. Shin quickly learns of her Yakuza background, ends up on friendly terms with her family, and is neck-deep in gang-related troubles over and over again. Kumiko remains oblivious to his feelings towards her while she focuses her own attentions on yakuza lawyer Shinohara, even though many others in the series have noticed Shin's feelings and are actively trying to help him.

Gokusen is fairly similar to Great Teacher Onizuka in premise — become trustworthy to the delinquents and teach them lessons through "Tough Love". However, Kumiko is properly educated and her secret background plays a large part in the series — for example, her students think she is in debt to yakuza because of one of her poor cover-up excuses, and she brings in a rather conspicuously shady fellow when she suddenly needs to tutor her students in boxing.

The manga was serialized from 2000 to 2007 in YOU, a josei magazine, and while it does have many Shōnen elements, it is noticeably geared more towards women, and fanservice is kept to a minimum though there are some notable exceptions.

A 13-episode animated adaptation aired in 2004; it was licensed for North American release by Media Blasters not long after – it has since fallen out of print (just like the rest of their pre-collapse catalogue). The multiple seasons of the live-action television drama, however, remain locked behind the language barrier, as does the original manga.

The manga and anime provide examples of:

The Live-Action Adaptation provides examples of: