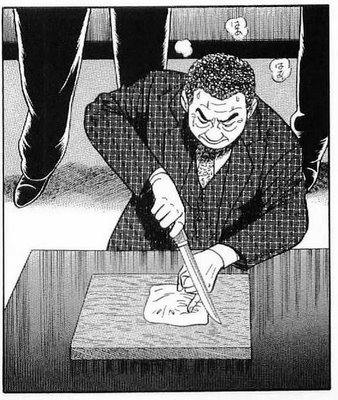 Yakuza culture + a major screwup + a bad case of Honor Before Reason = ouch.
"Apologies are a fine darb of a gesture and all, but I never know what to do with all those extra fingers..."
— Daimon Kiyota, The Secret World

Yubitsume, also referred to as "yubi o tobasu" (meaning "finger flying"), is a ritual from yakuza tradition that is performed when grovelling in apology just isn't enough. If a yakuza were to dishonor himself or his superiors, he is required to cut off the tip of his left pinky finger and offer it up as an apology to the offended party. And if a yakuza continues to screw up, it might not stop at one pinky tip, continuing in losing more joints and more fingers.

Yubitsume usually involves a specific ritual. The offending yakuza spreads out a clean cloth and lays his hand palm-down on it. With a short sharp knife (often a tanto), he then cuts off his pinky tip at the first knuckle. The knuckle is then wrapped in the cloth like a nice "package" and delivered to his superior.

Keep in mind, though, that within the Yakuza, many higher level members of the gang would bypass the punishment. If they screwed up, they never got their fingers cut off. It's all a fake show to keep the lower ranked members in line. Ain't fair, but that's life.

The practice originates in feudal Japan, where conventional sword grips rely on use of the pinky finger for control (typically the left one, if the wielder is right-handed); after yubitsume, the offender becomes weaker and more dependent on his superiors. These days however it is not as widely practiced anymore, and replaced with simply giving the offended party loads of cash.

Sometimes in fiction the exact ritual isn't followed, but the idea is the same: self-mutilation for the sake of honor or an apology.

A yubitsume scene is a must for any work prominently featuring yakuza.

Subtrope of Self-Punishment Over Failure.

This is one of two reasons (the other being Four Is Death) why Four-Fingered Hands are considered offensive in Japan.

Buying your wife a redundant birthday present? Clearly there's only one way to apologize for such a dishonor.

Buying your wife a redundant birthday present? Clearly there's only one way to apologize for such a dishonor.