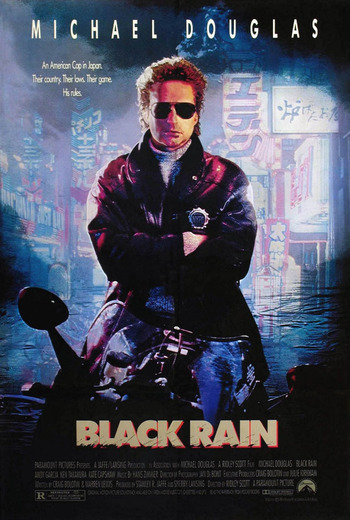 Like Sylvester Stallone in Cobra, Michael Douglas is trying way too hard to look cool in this movie.
"An American Cop in Japan. Their country. Their laws. Their game. His rules."
Advertisement:

Black Rain is a 1989 American action-thriller film, directed by Ridley Scott and starring Michael Douglas, Andy García, Ken Takakura, Kate Capshaw and Yusaku Matsuda. Hans Zimmer composed most of the soundtrack, with "Laserman" being the work of Ryuichi Sakamoto.

Detective Nick Conklin didn't need any more complications in his life. His ex-wife, the alimony payments, the rest of his bills, his kids, the occasional motorcycle street race and the Internal Affairs department investigating him for corruption were more than enough to keep him busy. But things really got interesting one day when he was eating lunch with his partner Charlie Vincent, and they happen to look over and see a known Mafia capo eating lunch and doing business with some Japanese gentlemen. Then a second group of Japanese men come into the restaurant, kill that first group, then flee. Nick and Charlie go after them, and after a tough chase that nearly costs Nick his life, they manage to bring the leader in.

It turns out the guy they caught is called Sato, and he's a notorious member of the Yakuza who is at the top of the wanted lists back in Japan. To get Nick out of the way of the IA investigation, and let him clear his head, their captain has Nick and Charlie escort Sato back to Osaka. Before they're even off the plane, they are met by a couple of detectives who take Sato off their hands. Looks like it's time to relax and take it easy on a nice little vacation... and then about a minute later the real detectives show up looking for Sato. Turns out those other guys were Sato's men.

Desperate not to give further fuel to IA, (and maybe to just do something right) Nick insists on staying in Japan to assist the Japanese police catch Sato. (Not that most of the local cops want anything to do with the pair of them). Older detective Masahiro Masamoto becomes their guide as they get drawn deeper and deeper into the Yakuza's underworld, an underworld which is on the brink of a major confrontation...

The film was nominated for Oscars in Best Sound and Best Sound Effects Editing. Trailer

Compare with The Yakuza, a Sydney Pollack film with a similar plot but a different take on themes.

Not to be confused with Peter Weir's The Last Wave, which was released in America as Black Rain. Or the Masuji Ibuse novel of the same name (later filmed by Shohei Imamura, also released in 1989). Or the various documentaries about the end of WWII with similar titles.