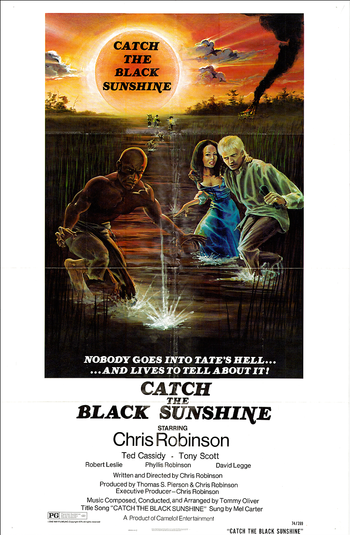 Black Rage is a Blaxploitation movie. Actually, the title is Catch The Black Sunshine, but that title wasn't as catchy, so it was reissued under the more exploitative movie title Black Rage, even though neither of the main characters are particularly enraged. The movie is about two brothers, both slaves, who escape from Striker, their cruel slave master (Ted Cassidy), to freedom while searching for buried treasure. The angrier of the duo is an "albino" black man named Sunshine played by a white actor named Chris Robinson who also wrote and directed the movie. This is just one of many criticisms directed toward this movie that have led to its reputation as one of the worst movies ever made. Other gripes people have with the movie are the generally bad acting, poor writing and slow pacing. Plot holes include the fact that the "albino" Sunshine repeatedly identifies as a slave, even though his complexion would allow him to pass for a white man, which would speed up their journey significantly.

Though audience and critical reaction remains universally negative, the performance of actor Ted Cassidy, who plays the villainous plantation slave master chasing after the brothers, has been singled out for praise by viewers of the movie. Cassidy is better known for playing Lurch on The Addams Family. Though Cassidy's performance is the only saving grace of the movie, with critics such as Isaac Baranoff identifying Black Rage as "A Blaxploitation movie so cheap that it can't afford to hire black people

" and The Cinema Snob featuring it on his show.

Tropes for Black Rage include: