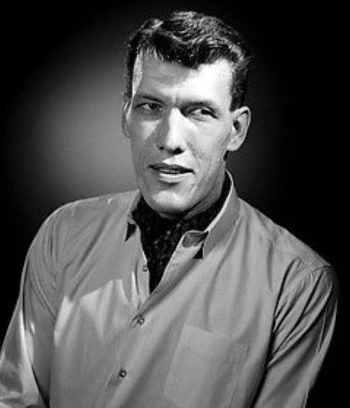 "You rang?"
— as Lurch, in The Addams Family
Advertisement:

Theodore Crawford Cassidy (July 31, 1932 – January 16, 1979) was an American actor and voice actor best known for playing Lurch, the family butler in The Addams Family sitcom from the 1960s. He's also known for providing the Opening Narration to the 1970s Incredible Hulk television series along with providing the growls and roars of the Hulk for the pilots and first two seasons. He was notable for his tall stature (6′9″) and his deep, bass voice.

He died at the age of 46 through complications of a tumor surgically removed from his heart, something he had developed from his acromegaly.