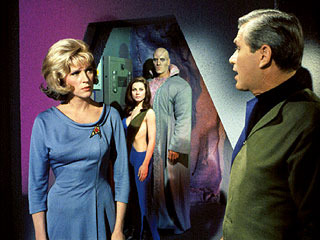 The Enterprise arrives at the planet Exo III, from which the last report from archeologist Dr. Richard Korby was transmitted five years before. Korby allows Kirk and Nurse Chapel, his former fiancee, to beam down. There they discover that Korby has been working with machinery left behind by the previous inhabitants of the planet, allowing him to become a master of robotics. But his extraordinary behavior, and requests for the resources he will need to continue his work, lead Kirk to believe he may have gone insane.

Best remembered as the one where Kirk grasps a phallic rock firmly in preparation to use it to strike a large, masculine opponent.

What Are Little Tropes Made Of?: