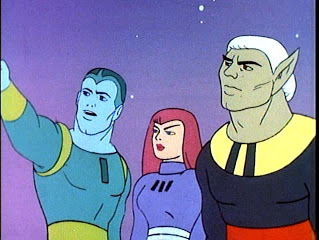 The Galaxy Trio was the middle segment to Birdman (1967) made by Hanna-Barbera in the 1960s superhero cycle.

The Galaxy Trio, stars of the backup segment, consisted of Vapor Man, who could turn his body into any kind of gas; Meteor Man, who could enlarge his fists or any other part of his body, and Gravity Girl, who could make people and objects seem lighter or heavier. Together, They Fight Crime! and patrol space in their cruiser, Condor One, maintaining order working for their superior, the Chief of the Galactic Patrol law enforcement agency.

Tropes in The Galaxy Trio: