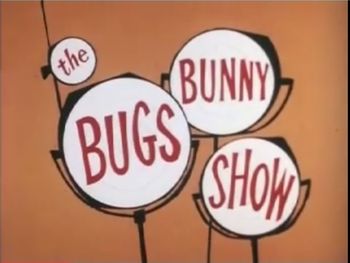 Tonight's what heights will hit: On with the show, this is it!
Advertisement:

This anthology show starring the Looney Tunes ran on ABC and CBS (bouncing back and forth between the two) on Saturday mornings from 1960 to 2000, making it the longest-running American animated program of any capacity to date. If the current rights-holders for these cartoons allowed it (they don't), then they likely would still have been on network TV well into the 2000s.

It began during the era of local kids' shows, and this show was an all-animated variant on the format. Bugs Bunny and Daffy Duck introduced Warner Bros. cartoons, all in color and originally released after August 1948. note The TV rights to the black-and-white cartoons (except for the Harman-Ising Merrie Melodies) were sold off to Guild Films in 1955; the copyrights were actually transferred to Warners' advertisement production subsidiary, Sunset Productions. After Guild went bankrupt in 1961, the rights were sold to Seven Arts, which Warner Bros. merged with in 1967. Meanwhile the copyrights to the pre-August 1948 color cartoons and Harman–Ising Merrie Melodies were outright sold to syndicator Associated Artists Productions in 1956 (they also bought almost the entire pre-1950 WB features library!). a.a.p. eventually landed in the hands of United Artists, which merged with Metro-Goldwyn-Mayer in 1981. Turner Broadcasting acquired the shorts (and WB features) along with the pre-1986 MGM library when they acquired then sold MGM/UA for 74 days in 1986. With the 1996 acquisition of Turner by WB parent Time Warner, the entire filmography was reunited, but the pre-1948 cartoons were still never included in The Bugs Bunny Show. Various animated antics happened in between. The basic format didn't change much.

The show lasted an entire hour (though some incarnations were 30 minutes, and some incarnations ran as long as 90 minutes), and Looney Tunes shorts were slightly shorter than the standard Saturday Morning Cartoon shorts, so you could see a lot of cartoons in that hour. Many of these cartoons were either originally aimed above the average audience of the show or the Larriva Eleven, but there was something for everyone.

Incarnations of this show:

This series (and bridges) provides examples of: