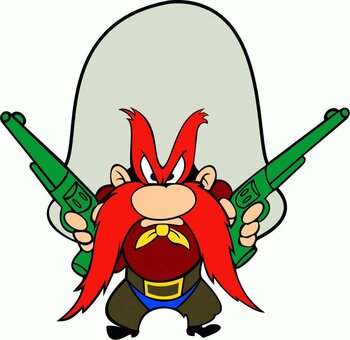 Yosemite Sam is a cartoon character starring in Looney Tunes and Merrie Melodies. Having an intense hatred of rabbits, he is an Arch-Enemy of Bugs Bunny.

Yosemite Sam was introduced in 1945 by Friz Freleng as a less sympathetic enemy for Bugs Bunny than the rather mellow and well-mannered Elmer Fudd. As an aggressive bully with a fondness for shootin', Sam gives Bugs moral license to unleash his Karmic Trickster on him without losing any audience sympathy. Sam was one of the rare characters to see exclusive use by only one of the Termite Terrace directors — his creator, Freleng (save for "Dumb Patrol", which was directed by Freleng's longtime animator, Gerry Chiniquy). He never appeared in any Chuck Jones or Robert McKimson cartoons, with two exception: "Hare-Abian Nights", a Clip Show directed by Ken Harris (an animator from Jones' unit) featuring archive footage from Freleng shorts, and "From Hare to Eternity", a short from the 1990s directed by Jones as a tribute to the then-recently deceased Freleng.

Sam has been used either as a prospector, outlaw, pirate, cowboy, black knight, prison guard etc., depending on the cartoon, sometimes with a different alias if the setting isn't based on Western. At heart, he stays a (usually gunslinging) cowboy, anyway.

Chuck Jones had a great-uncle who used to stay with his family sometimes; he was a retired Texas Ranger, short, redheaded, with a huge mustache and a hair-trigger temper, and generally thought to be the model of Sam. Others, however, say he was based on his own creator Friz Freleng, himself a short, mustachioed man with a large nose and (according to his daughter) a very bad temper.

"BEFORE ANY OF YOU START GITTIN' ANY IDEE-ERS, YA BETTER KNOW WHO YOU'RE TROPIN' WITH!":

Ooooooh! I hate that trope!