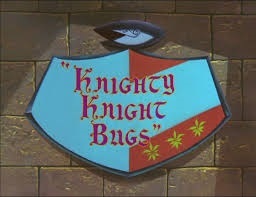 In the court of King Arthur, the King asks for one of his Knights of the Round Table to retrieve the Singing Sword from the clutches of the Black Knight (played by Yosemite Sam), but none of them dare to face the Black Knight and his fierce fire-breathing dragon. An ill-timed crack from Bugs, playing the Court Jester, about how "only a fool would go after the singing sword" sees him sent out on the dangerous mission.