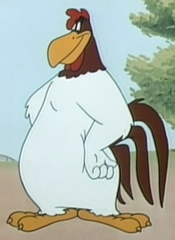 Foghorn Leghorn is a recurring character of the Looney Tunes and Merrie Melodies short subjects, created by Robert McKimson. Despite only starring in 28 short cartoons between 1946 and 1963, he is still considered a major star.

The shorts are centered on the eponymous Rhode Island rooster with a Central Virginia accent, no filter between his mouth and his mind, and very expressive body language. His voice is patterned after a 1930s radio character known as "The Sheriff", with his phrases cribbed from Senator Claghorn, a regular character of the Fred Allen radio show.

Foghorn considers himself the life of the party. He demonstrates this by tricking baby chickenhawks out of capturing him, playing slapstick pranks on the Barnyard Dawg by beating him with a wooden board and painting his tongue green, or babysitting a genius chick named Eggbert in order to cozy up to his widow hen mother.

Foghorn made several appearances in Tiny Toon Adventures, made a cameo in the ending of Who Framed Roger Rabbit, and appeared in two of the 1990s Chuck Jones shorts. He also appeared in Space Jam as a member of the team, and made a brief appearance in Looney Tunes: Back in Action.

Currently, ol' Foggy's appearances are infrequent, aside from commercial work for KFC note Try to think about the implications of that, Oscar Meyer, and GEICO. His most recent appearances were in The Looney Tunes Show, Wabbit: A Looney Tunes Production, Looney Tunes Cartoons, and Space Jam: A New Legacy.

Filmography... Cartoons, that is!

All shorts up to Banty Raids are directed by Robert McKimson.