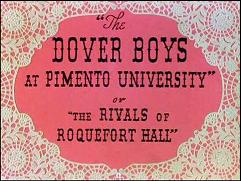 A Description... I'LL STEAL IT! NO ONE WILL EVER KNOW!

A 1942 Merrie Melodies short subject directed by Chuck Jones, "The Dover Boys at Pimento University" or "The Rivals of Roquefort Hall" (just "The Dover Boys" for short) is an animated parody of a series of early 20th Century juvenile fiction novels called The Rover Boys.

This was Chuck's first attempt at making a cartoon that would later be reflective of his (and by extension, the studio's) trademark style – unlike the cloying cuteness and Disney-like nature of his Sniffles the Mouse cartoons. It was also an early experiment with stylized Limited Animation, as well as smearing. It almost got Chuck fired for its unorthodox nature – he just barely managed to avoid the pink slip from his boss.

The short has fallen into the public domain and can be viewed here.

Columbia Cartoons even made their own knockoff of it, in 1943's "The Rocky Road To Ruin."

The Dover Boys were also used in an Animaniacs Slappy Squirrel Short (acting as musical narrators to Daniel Boone), in Wakko's Wish, and made a cameo as crowd members in Space Jam. A remake,

featuring ninety-plus animators reanimating each individual shot in their own style, was released in 2018.

Unmarked spoilers abound. If you have a problem with that, just watch the cartoon first. It's only 9 minutes long.

Confound those tropes! Oh, how I hate them!

"Now is the time to say 'goodbye'. Goodbye."