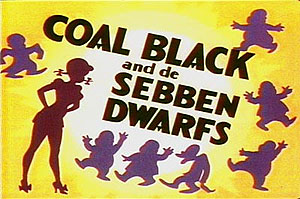 Coal Black and de Sebben Dwarfs is a controversial 1943 short directed by Bob Clampett for the Merrie Melodies series. It is a retelling of Snow White with a modernized setting (for the 1940s) that uses an all-black cast and a hot jazz soundtrack — as well as a lot of outdated racial stereotypes and wartime references.

Animation historians (as well as general fans of classic animation) consider this short to be one of the finest cartoons ever made... but they also acknowledge that it is one of the most racially insensitive cartoons ever made (not just with its caricatures of African-Americans, but there is some World War II racism). It remains part of the "Censored Eleven" (a collection of 11 Warner Bros. cartoons that have been pulled from distribution since 1968 due to extensive stereotyping of African-Americans). While there have been attempts to get this cartoon released to a mainstream audience, nothing has come of it.