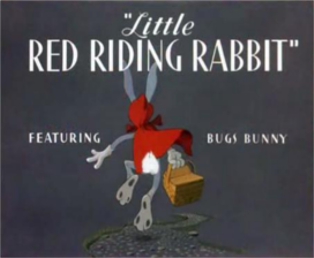 "Little Red Riding Rabbit" is a 1944 Warner Bros. Merrie Melodies cartoon, directed by Friz Freleng, and starring Bugs Bunny. This is the first time Mel Blanc receives a credit for a cartoon.

It is a parody of the Little Red Riding Hood story, in which Red, a typical 1940s teenage bobbysoxer with a very loud, grating voice, is bringing a rabbit [Bugs] to her grandma "to have". Of course, a big bad wolf is waiting for them.