Through a Face Full of Fur 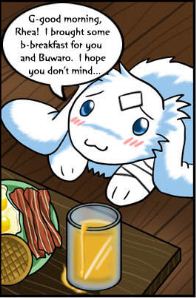 The talking waitress bunny is blushing? That's just ridiculous.
"How can anyone blush through a face full of hair?"
— Charlie Brown, Peanuts
Advertisement:

Most mammals are covered in fur, most birds in feathers, most reptiles in scales. Thus, if the blood rushes to the animal's skin as a result of effort, anger, embarrassment or pain, it should be covered from view, though if an animal has light-colored, thin fur or feathers, something of the skin tone may still be visible. Some creatures, namely robots, are inorganic, and have no blood with which to blush. However, a remarkable phenomenon takes place in the world of animated beings. There, if a bear burns or drops a hammer on its paw, or a duck is bilked of a million-dollar prize, or a griffin is caught in the shower without a towel on, or a robot is kissed by their crush — or even if a factory whistle is just blowing too strenuously — the creature or object will turn bright red — flesh, fur, feathers, or metal included. This phenomenon is usually restricted to the face, but will on some occasions spread over the whole body and even their clothes.

A variant reaction may take place when a character is frightened, in which case it may turn yellow or white; or freezing, when it may turn blue; or sick, when it may turn green or yellow or, in extreme cases, patterns of colors such as polka dots or plaid. An animal at any level of the Sliding Scale of Anthropomorphism can sometimes have tanned fur or feathers, which acts like skin.

Since this is primarily an Animation Trope, humans aren't exempt from it—a character with a very thick beard or mustache may be shown with a visible blush when they logically should not have one.

Though this is primarily an Animation Trope, being a common feature of Funny Animal Anatomy, it will occasionally show up in other media as well.

Not to be confused with seeing through a face full of fur; that's Blinding Bangs.

Grumpy Bear is the reigning pie-eating champion of Care-a-Lot.

Grumpy Bear is the reigning pie-eating champion of Care-a-Lot.