Western Animation / An Itch in Time 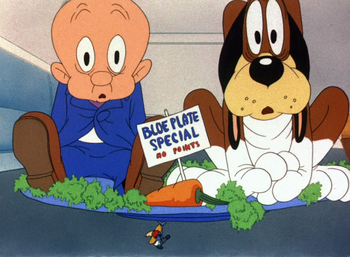 An Itch In Time is a 1943 Merrie Melodies cartoon, directed by Bob Clampett.

In it, traveling vagabond A. Flea has decided to set up camp on Elmer's pet dog. The dog desperately wants to scratch himself free of the pesky newcomer, but has been sternly warned by Elmer that if he sees him "skwatching" he'll give the dog a very unwanted bath. Hilarity Ensues as Flea's pestering slowly but surely become too much to bear.