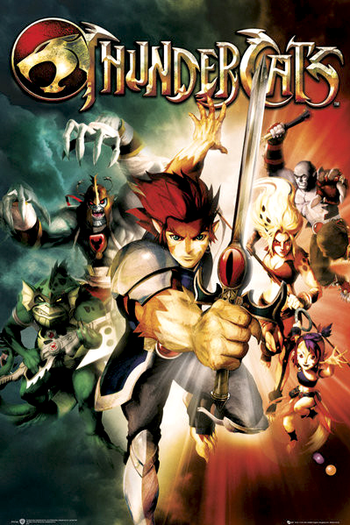 ThunderCats (2011) is a reboot of the 1985 animated series of the same name. The series follows a group of alien cat-people from the Kingdom of Thundera on the planet Third Earth. Led by the young King Lion-O, they travel in search of artifacts that can defeat a re-awakened enemy from the ancient past, the evil sorcerer Mumm-Ra. It's produced by Warner Bros. Animation and animated by Japan's Studio 4°C. It received an hour-long premiere on Cartoon Network on July 29, 2011. Click here to watch the official trailer

The series aired on Toonami, like its father before it, up until Cartoon Network lost the rights to it and they reverted back to Warner Bros. on July 20, 2013.

Unfortunately, the show was canceled after airing 26 episodes, only half of what was initially planned. Fans of the show had worked hard to convince Warner Bros. and Cartoon Network to give the series a second chance, including an online petition

Another reboot set in a different continuity, titled ThunderCats Roar, was announced in 2018 and premiered in 2020.

Has a wiki here.

Has a discussion thread here.

A recap page is currently under construction.

During a fight with Panthro, Mumm-Ra calls upon the Ancient Spirits of Evil to transform into his true form.

During a fight with Panthro, Mumm-Ra calls upon the Ancient Spirits of Evil to transform into his true form.