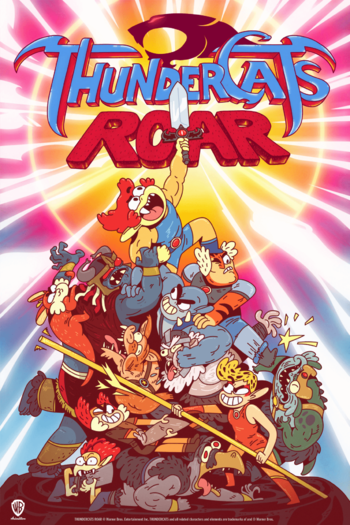 It's time to roar once more!
Their planet exploded (thunder, thundercats!)
They crashed on Third Earth (thunder, thundercrash!)
They defeated some bad guys (mummies, mutants!)
And made some new friends! (unicorns, robots!)
They built a big base with a cat-shaped face and now they’re ready to go!
There’s Willykit, Willykat, Tygra, Panthro, Cheetara, Snarf, Lion-O!
A brand-new lord with a magic sword
Thunder, thunder, thunder, Thundercats, roar!
— Opening Tune
Advertisement:

ThunderCats Roar was an animated television series based on the 1985 ThunderCats cartoon and the second franchise Reboot after the 2011 cartoon. Produced by Warner Bros. Animation for Cartoon Network, the series first debuted online on January 10, 2020, followed by a linear premiere in February of 2020. Only one season was produced

The ThunderCats, sole survivors of the destruction of their home planet, Thundera, crash land on Third Earth and make a new home there, where they become its new protectors and take on its evil overlord, Mumm-Ra. Unlike previous incarnations, Roar is a fast-paced Affectionate Parody emphasizing some of the absurdities of the series' setting and premise.