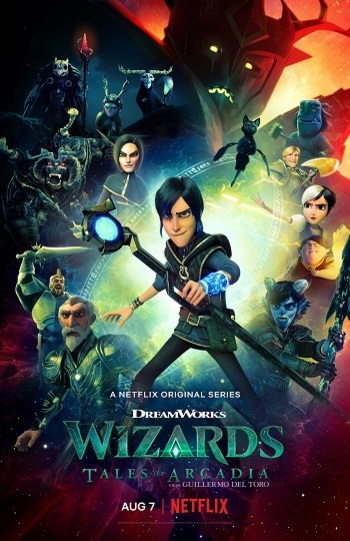 Everything ends here.
"A wizard does not make mistakes. He makes unexpected possibilities."
— Merlin
Advertisement:

Wizards is a 2020 American computer-animated television series created for Netflix by Guillermo del Toro, produced by DreamWorks Animation and Double Dare You. It is the third series in the Tales of Arcadia anthology, followed by Trollhunters: Rise of the Titans in 2021.

Trouble is afoot in Arcadia once again, but this time it's not Trolls or Aliens, but Wizards who threaten the seemingly peaceful town. It's up to Merlin's very own apprentice, Douxie, to gather the heroes of the town together to once again fight to save the world. Things don't go well from the start though when during a battle the team is sent to the past, to the time of Camelot.

The series premiered on August 7th, 2020. You can see the first trailer Here