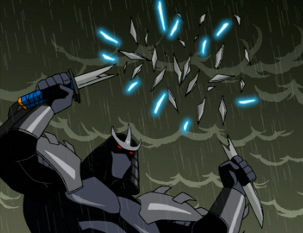 While the heroes get kicked around a lot, after a certain point we don't worry so much. But if you want to really show off how badass a new antagonist might be, not only should they beat the hero in a fight quickly, but they should hurt their pride. The easiest way to do that is smash up their signature weapon/accessory.

Although this is sometimes a cheap and inexplicable device to show off a new transformation, more often the hero is figuratively neutered, and has to deal with the emotional aftermath. Even if he has a buddy who can fix it up, that won't be as important as him coming to grips with either his reasons for fighting or just learning not to be such a clod about it. If this is a videogame, it's by far the easiest way to REALLY piss off the player along with their virtual avatar.

Naturally, this is much more emotional for the character if they also have a Empathic Weapon and even worse if it's a Equippable Ally or other Living Weapon. If the weapon is an actual part of the character's body, it's a Fake Arm Disarm, which makes the crippling somewhat more literal.

For antagonists, such a moment can function similarly to a Hero Killer moment but without having to kill anyone important. A way to show that a villain is not the usual fare and will require something new to confront, the destruction of the hero's weapon signifying that the old ways are out. An Outside-Context Problem can often manifest like this when they first make their presence known, the hero trying to use their typical response but only to discover that they are ineffective, destroying their treasured weapon in the process. The answer to this is often a Next Tier Power-Up, either by the hero forcing themselves to learn that they were more than their weapon (and thus finding new strength/resolve from within) or simply finding the Sword of Plot Advancement and/or Infinity +1 Sword to make another stab at the villain.

In some cases the breaking of a character's weapon can be foreshadowing of that character's death (if it occurs shortly before), or symbolic of it (if it occurs during or shortly after). In this case there may be some overlap with Tragic Keepsake if one of the character's friends keeps the weapon or a piece of it as a memento. If the weapon also has an association with a nation (for example the royal sword of the king) then it can even signify the fall of the nation in question. If a villain's weapon breaks, it usually signifies that their reign has come to an end as a villain's weapon is usually a symbol of their power. Alternately, the breaking of a soldier's sword is normally a major part of an Insignia Rip-Off Ritual.

Although sometimes on rare occassions and if at all possible, the victim of this trope will continue to use the broken weapon or at least, pieces of it to fightnote Like say, a blade of a sword being shattered yet there's still enough metal left for it to be used as a knife, even a type of polearm (like say a spear) or even Simple Staff, being bisected in half. Forcing the user to either dual-wield or use the blade part of the stick as a dagger, and that's barely scratching the surface.

The reasoning for the character still using this weapon can have a few symbolic meanings* Like their weapons may be broken yet their spirits aren't as an example or they just simply have no other options. As it broke in the middle of the fight and they just have to work with what they have, it really depends on the context and situation. This also essentially makes them into an Improbable Weapon User depending on what pieces of the broken weapon they choose to use or just how broken their weapon is.

May lead to Reforged Blade, Give Me a Sword or even It Was a Gift. Can be used for an Intimidation Demonstration.

In a mundane "real world" series without magic or swords, the easiest way for a villain to do this is to trash the hero's ride.

Compare Breakable Weapons, where this is a gameplay mechanic instead of a plot event. Contrast Like Cannot Cut Like. A weapon with Detachable Blades can simply replace the blade and it becomes usable again. See Scarred Equipment for weapons that are worn out.