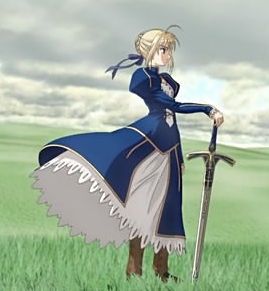 A character stabs the ground (or a wall) with a sword (or any other weapon, for that matter) as an attack, to help stand up, as an anchor, or just to look cool.

As an attack, it can be performed as a pointier version of a Ground Pound and/or Shockwave Stomp, depending on whether the user is executing it from above.

In the tiresome world of Real Life, this is ill advised — mistreat a sword this way and you are likely to chip, dull, bend, or even break the blade. In fiction, of course, anything is possible if it looks cool enough. So, go ahead and drive your Absurdly Sharp Blade into six inches of reinforced concrete: it'll be fine. That said, this trope has a little backing in reality: sand or soft soil can be used to clean a blood-covered blade if nothing else is around, preventing rust. In any case, it's better to leave the sheath on when doing this.

Some spears actually are designed for this, with a butt spike that’s less delicate than the main weapon end; on the Greek hoplite's Dory spear, this spike was called the sauroter or "lizard-killer". The warrior was thus able to stick it in the ground and leave it standing there until they were ready to retrieve it.

Contrast Stab the Sky and Sword Pointing. A plant which happens to be a sword comes under Living Weapon. See also The Blade Always Lands Pointy End In, which is about when swords are thrown or dropped and land point-downward, Stepping-Stone Sword, when a sword thrown or driven into a surface is used to climb or stand on, Weapon Tombstone when a sword is used as a tombstone marker, Ground Punch when a weapon is not used, and Left Stuck After Attack if a weapon is unintentionally made stuck.

If you're looking for plants that grow swords, see Grows on Trees.