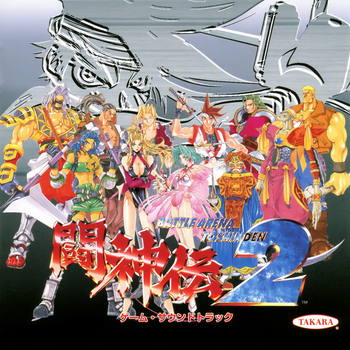 DEATH. It's what they live for.
"Some fighters have come for personal glory,
Others have come to fight for those they love,
But all will do their best to be victorious in this tournament
Which will decide their fortunes..."
Advertisement:

Battle Arena Toshinden (simply titled Toshinden in Japan) is the first 3D fighting game franchise where every character toted a weapon of some sort (the first series to do it in 2D was Samurai Shodown). It was considered a killer app when it was released as a PlayStation launch title, and Sony promoted it heavily. However, as the years passed by, it got left in the dust, as it was upstaged by other 3D fighting game franchises such as the Virtua Fighter, Tekken, and the Soul series, who continued to innovate and refine their gameplay while Toshinden remained stagnant. Not quite as fondly remembered as it was back then, but still worth a look.

The story of Battle Arena Toshinden revolves around a secret fighting tournament known only as the Toshindaibukai and that those who are deemed worthy of participating in it are handed invites by a secret group known only as the Himitsu Kessha (Secret Society in the English version).

The first game in the series has eight participants competiting in the battle, each of them having their own reasons for heading into the tournament. The second game would be much like the first, except that two new challengers would enter into the fray and that the tournament itself would be nothing more than a mere ruse in order to lure out a specific target named Gaia, who happens to be a former member of the Himitsu Kessha, marked for immediate death after illegally holding the first tournament without the consent of the Himitsu Kessha and that he had tried to start a rebellion against the organization.

The third game in the series would center around a new antagonist group known as the Soshiki (Organization in the English version) and their leader, a power-hungry megalomaniac named Abel. In order to bring a destructive fighting god named Agon Teos into the world, Abel and his minions must gather the blood of the strongest warriors and targets the Toshinden fighters as their sacrifices. Hunting them down mercilessly with underhanded ways, and hiring assassins and enemies that could bring them in, he then gives the fighters an ultimatum: Participation in the third tournament to corner them and settle things face to face in the ring, or forever find themselves and their loved ones chased down and victimized until they surrender or die trying to escape their grasp.

The fourth and final game in the original series would take place a few years after the events of Toshinden 3 and that it would center around a young man named Subaru Shinjo (the son of Sho Shinjo and Cupido), who sought to find his missing uncle Eiji while participating in a new Toshindaibukai tournament.

The series also has a 2D Game Boy port. Unlike other fighting game ports was released on the Game Boy, it's actually quite good and entertaining. It includes all the 8 playable characters from the first game and 4 bosses (Gaia, Gaia II, Sho, and Uranus). The background music is also outstanding to say the least. One weird fact that distinguish it from other 2D fighting games is that keeps its Ring Out feature from the 3D games, but it's made in such a way it doesn't break the game balance (you've a 3 points Ring Out meter; until it gets emptied you don't fall). If you have time in your hands, give it a look,

In 2009, the series had gotten a spiritual successor for the Wii in the form of War Budokai (simply titled Toshinden in Japan, but spelled with different kanji charactersnote the original PlayStation games are titled 闘神伝, while the Wii version is 闘真伝), a weapons-based arena fighter with heavy anime influences which also incorporate skills such as summon magic.

The original games were also adapted into a 2-part OVA anime in 1996, directed by Masami Obari (who also directed the Fatal Fury: The Motion Picture). It was the first anime DVD released by Central Park Media in the Western market (and possibly the first Western market anime DVD period).

There is also evidence of a long deserted plan for a Toshinden prequel,

through the pictures found in Toshinden Card Quest, now long known as Toshinden Next. As it stands, Next was supposed to have delved deeper into the affairs of the four executives of the Toshinden games, being Gaia, Cupido, Uranus, and Chaos, before what would lead into Gaia's mutiny, and as well into supporting characters mentioned and hinted to in the main series, with the Secret Society's own influences affecting them all as well.