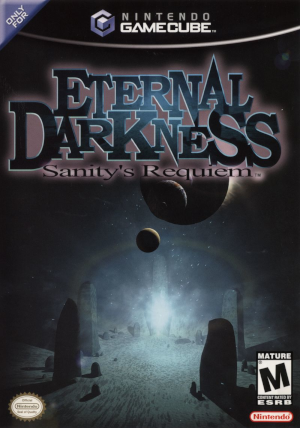 You, too, will come to understand fear... as I have.
"Deep into that darkness peering, long I stood there wondering, fearing, doubting..."
—Quote from Edgar Allan Poe's "The Raven" used in the game's title sequence.

Eternal Darkness: Sanity's Requiem is a horror-themed action-adventure game released for the Nintendo GameCube in 2002. It was developed by Silicon Knights and published/owned by Nintendo.note It is the first M-rated game published by Nintendo. The game contains psychological horror elements and is influenced by, and features numerous nods to, the works of H. P. Lovecraft, Edgar Allan Poe, Alfred Hitchcock, Stephen King, and other similar authors, making it something akin to Resident Evil meets Call of Cthulhu.

Alexandra "Alex" Roivas, a student at a Washington university, is completing her graduate degree in abstract mathematics and number theory. An early morning call from a detective brings her rushing to her grandfather's Rhode Island mansion, as she has to identify his body after his grisly and baffling murder. The detective is left clueless, because the house shows no signs of a break-in and the old man had no known enemies. The police investigation into the murder eventually stalls, but Alex stays in the mansion to try to figure out the mystery behind her grandfather's death.

Her search of the mansion leads to a hidden book called the Tome of Eternal Darkness, a book that contains the stories of people throughout history who were involved in both unlocking and fighting against several otherworldly gods. As Alex reads the book, she is imparted with the knowledge these long-dead people achieved — as well as arcane magic unleashed by their explorations. Continuing to read the book loosens her grip on both reality and sanity, but Alex is determined to be the last link in the story — and stop the evil forces once and for all.

Eternal Darkness brought several things to the table that no game before it had managed to pull off. A versatile magic system allows the player to create new spells using runesnote technically closer to sigils or glyphs, as the symbols in the game represent words while real runes are single letters in a system much like grammatically creating new sentences. The game also includes a "sanity system." In addition to health and magic meters, the game's Sanity Meter drops every time an undead creature sees you. You can regain sanity by decisively finishing the creatures off, though the recovered amount will always be less than that taken away in the initial shock. If the Sanity Meter drops low enough, players will experience random in-game hallucinations: Books spontaneously fly from one bookshelf to another, footsteps follow Alex despite nothing being behind her, and Alex's dead family members might even make telephone calls or show up as ghosts. More devious hallucinations involve body parts exploding during unsuccessful magic casting, screaming voices and bleeding walls, random paintings turning from idyllic scenes to hellish environments, and statues and busts watching Alex as she walks by. The worst of these effects are the hardware tricks: The controller ceases to work in a room full of enemies, the video signal cuts out, the audio volume changes on its own, and the game leads you to believe it has erased your memory card.

Despite Silicon Knights' eventual bankruptcy, founder Denis Dyack has long-wanted to create a sequel known as Shadow of the Eternals, and has attempted several times to crowdfund it under multiple different new companies. Due to several setbacks, including the aforementioned bankruptcy, the initial crowdfunding campaign's very unpopular terms and the arrest of the co-designer, it seems increasingly unlikely that it will ever get made, but Dyack has yet to give up.

After sixteen years of relative silence regarding the game in any form besides renewing its trademark, Nintendo gave it an official nod by including Alex as a Spirit in their massive crossover, Super Smash Bros. Ultimate.

, although some aspects of it don't run properly since the death of Adobe Flash.