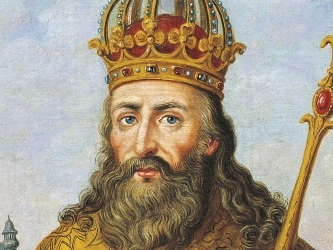 Action is better than knowledge; but in order to do what is right, we must know what is right.
Charlemagne, oh Charlemagne!
A shaft of light in a Dark Age!
For now he is the King of the Franks!
Standing tall above men of all ranks!
—Charlemagne: By the Sword and Cross
Advertisement:

Charles the Great aka Charlemagne, Karl der Große or Charles I (2 April 742 – 28 January 814). King of the Franks, King of the Lombards, and Imperator Romanorum. Established the Carolingian Empire. Fostered the spread of Christianity throughout Western Europe. Crowned the first Western Roman Emperor in over three centuries since the end of the actual Western Roman Empire, sowing the seeds of what would become the Holy Roman Empire. Shed the blood of four thousand Saxon men.

The son of Pepin the Short and Bertrada of Laon (aka "Bertha Broadfoot"), as well as grandson of the legendary Charles “The Hammer” Martel, Charles was born into the brutal and cutthroat world that was 8th century Europe. Both his father and grandfather had grand ambitions to quell the internal power struggles that plagued the Frankish kingdom and build a larger, more stable empire. But Charlemagne was the one who actually pulled it off, and he pulled it off so brilliantly that he is still regarded as one of the greatest leaders in European history, the inspiration for many statesmen and would-be conquerors throughout history...for better or for worse.

Not much is known for certain about Charlemagne’s early life. He was born some time around 742, in what is now Belgium. He was apparently very well educated; he was literate (which was a big deal back then, even for royalty), and spoke several languages, including Latin and Greek (though according to most sources, he learned both of those relatively late in life, and never really fully learned Greek). With the death of Pepin in 768, in accordance with Frankish tradition, his kingdom was divided evenly between his sons Charles and Carloman. Despite working together to quell an Aquitanian uprising early in their reigns, the two brothers were almost constantly at each other's throats. After a diplomatic falling out between Charles and the Lombards of northern Italy, Carloman was just about ready to ally himself with the Lombards and go to open war with his brother... when Carloman suddenly — conveniently — died of illness in 771. This left Charles as now sole ruler of the Franks, at which point he promptly got down to business conquering the known world.

Lombardy was first on the list. Forming an alliance with Pope Adrian I, Charlemagne rolled into northern Italy, besieging the Lombards at Verona and Pavia, and accepting their surrender in the summer of 774. In gratitude, the Pope bestowed upon him the title of patrician note  a vaguely-defined title of legal authority, roughly equivalent to a modern-day law-enforcement marshal . Charlemagne himself, meanwhile, crowned himself King of Lombardy. There was very little dissent.

More battle was to follow, as Charlemagne began to expand the boundaries of his empire in nearly all directions. He waged a long war of conquest against the Saxons to the east (during which the aforementioned blood was shed). He sparred with Saracen pirates in the Mediterranean, conquering the islands of Corsica and Sicily in the process. His son Louis pushed over the Pyrenees Mountains, capturing Catalonia and Barcelona, and establishing a fortified borderland against Muslim Spain.

Greater things were to come, however, and it was after the death of Adrian in 795, that events began to be set in motion. The alliance between the Papacy and the Franks wasn’t universally approved of in Rome, and the successor to Adrian – Leo III – was very quickly selected in order to mitigate any possible influence the Franks might have on the election process. However, it turned out that Leo had every intention of maintaining the alliance, sending gifts to Charlemagne and reaffirming his role as defender of Christendom. This decision galvanized the anti-Frankish elements in the Vatican to action, and in 799 Leo was forced to flee Rome after an assassination attempt and accusations of adultery and perjury. Naturally, he fled to Charlemagne’s court. And naturally, Charlemagne came to his aid. In late 800, Charlemagne accompanied Leo back to Rome, convened a legal council, and acquitted Leo of all the accusations his enemies had made, reinstating him as Pope.

Such a service to the Church did not go unrewarded, for on Christmas Day, 800, Leo bestowed upon Charlemagne the title of Carlo Augustus, Imperator Romanorum: Charles the Great, Emperor of the Romans. This also served a political purpose, as Leo was on the outs with the Eastern Roman Empire a.k.a. the Byzantine Empire, and its Empress, Irene, for both political and religious reasons. Since Irene's succession was dubious (both because she was a woman without a consort and because she blinded her son to take it), he had a technical excuse to do so. The first to bear that title in Western Europe since 476, Charlemagne’s power in the region was now pretty near absolute, and he almost immediately put that power to use. He began to institute widespread reform throughout the lands he controlled, introducing standardized codes of law, repairing roads, and encouraging the growth of centers of art and learning. His reign as Emperor is referred to by historians as the “Carolingian Renaissance,” and is commonly held to mark the end – or at least, the beginning of the end – of The so-called Dark Ages (mostly, it's now referred to along the lines of the Early Medieval Period).

As a political entity, Charlemagne’s empire was short-lived. Following his death in 814, his sole surviving legitimate son Louis took the throne. His reign was marked by unrest and civil war, and following his death in 840 his three sons divided the empire up between them, marking the end of a united Carolingian kingdom—which is how both France and Germany can (and do) claim Charlemagne as their own. As a cultural force, however, his empire's impact outlived him. The peace and stability Charlemagne's reign brought to Western Europe established the foundations for a stronger, more egalitarian society, with a greater sense of cultural unity than before. Western Europe had been a battleground for the better part of four centuries, host to intertribal warfare, barbarian invasions, disease, and death. The psychological impact of suddenly having one benevolent overlord who really did seem to be interested in creating a better world cannot be underestimated. In the chivalric traditions, Charlemagne is depicted as the proverbial Good King, on par with King Arthur and Louis IX/Saint Louis as a paragon of wisdom, justice, and piety.

How much of that reputation is rooted in fact, however, is not certain. Charlemagne’s reign as King of the Franks was a period of almost constant warfare, first in building his empire, and then in maintaining it against rebellious tribes and ambitious underlords. It was a brutal world that Charlemagne was born into, and he couldn’t very well get as far as he did without being equal to the brutality that surrounded him. One infamous incident occurs during his campaigns against the Saxons. Charlemagne instituted a strict "Convert or Die" policy toward the Germanic pagans, and at the city of Verden he was forced to put his dedication to this policy to a very dark test, executing over four thousand captive Saxons who refused to embrace Christianity. Of course, violence on this scale was hardly unheard of in the Middle Ages, but the wholesale slaughter of unarmed prisoners is something of a black mark on the record of the man traditionally held up as a shining example of all that is good and just.

That aside, Charlemagne does seem to have been a pretty decent guy, all things considered. Very well educated himself, he appreciated the value of learning and literacy, and did his best to foster its spread throughout his realms. He was also an accomplished diplomat as well as a warrior: it’s worth noting that he tried to negotiate with the Lombards before going to war with them, only doing so when all diplomatic avenues were exhausted. Under his reign, the Franks even maintained good diplomatic relations with many of their Muslim neighbors, including a strategic alliance with the Abbasids against the Byzantines. By all accounts, he was a genuinely devout Christian, donating large sums of money and land to the Church during his reign, as well as a loving and devoted father to his children.

Speaking of which, not unlike a certain other similar conqueror, Charlemagne got himself around. He had several wives and mistresses over the course of his life, and among them all, had close to twenty children. The royal families of England, France, Italy, and several German states can claim him as a distant ancestor. Not to mention a whopping 34 of the 46 U.S. Presidents, and at least one awesome movie icon. He is also one of the rare ruling figures to have equal importance in both French and German nationalism, a division of the Waffen SS made of French volunteers (the 33rd) was even named after him during World War II.

So much of Charlemagne's life is conflated with legend that it's hard to really determine what was real and what wasn't. Some common themes in his fictitious portrayals include: