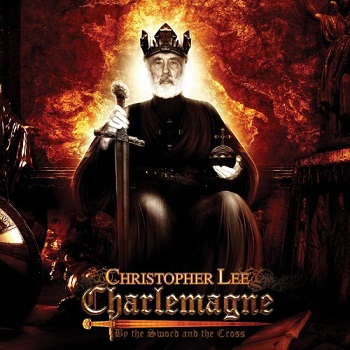 HE SHED THE BLOOD OF 4000 SAXON MEN
"Let legend mark me as the King, of whom future generations will sing."
Advertisement:

Charlemagne refers to a set of two Concept Albums dramatizing the life of King Charlemagne and the Holy Roman Empire. It stars Christopher Lee (who was a verifiable direct descendant of Charlemagne) in the title role, and was also released through his production company called, incidentally, Charlemagne Productions

By the Sword and Cross
The first album, Charlemagne: By the Sword and the Cross, was released in 2010 and is Heavy Mithril in the style of Symphonic Metal. Produced by Corrado Canonici, with music by Marco Sabiu, the performers included Manowar, Rhapsody of Fire, and a 100 piece orchestra. In addition to Lee, the other actors include Phil S.P. as Charlemagne's father Pippin the Short, Mauro Conti as Pope Hadrian, Vincent Ricciardi as the young Charlemagne, Lydia Salnikova as Charlemagne's wife Hildegard, and Christopher Lee's daughter Christina as the narrator.

The story begins at the end of Charlemagne's days, as he looks back on his life and the many military campaigns he fought... particularly troubling for him was the Massacre of Verden, where he ordered the public execution of 4000 Saxon Men. Tormented by memories of these and other cruelties he engineered in the name of God, he is afraid that he might be damned for his actions and remembered as a tyrant rather than as a Christian warrior king. 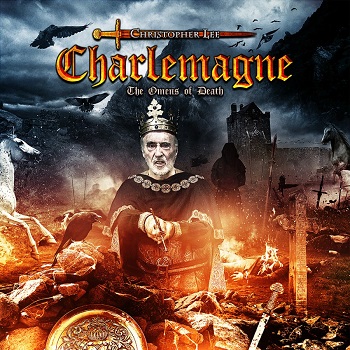 The second album, Charlemagne: the Omens of Death is a part sequel/part retelling of the first album, done in the style of full-blown Heavy Metal, with music by Richie Faulkner. Unfortunately, partway through the development, Faulkner was recruited by Judas Priest, which sent the album into Development Hell for a time, until guitarist Hedras Ramos Jr stepped in to finish the musical arrangements. The original cast returns, along with Gordon Tittsworth as Roland, Daniel Vasconcelos as Oliver, and Aaron Clouther as Duke Lop. A sample was released on May 27, 2012 (Christopher Lee's 90th birthday), and the full album was released on May 27, 2013. You can listen to samples here

The songs released in the Omens of Death sampler, "Let Legend Mark Me As the King" and "The Ultimate Sacrifice", are available for Rock Band 3 and Rock Band Blitz

By The Sword And The Cross

The Omens Of Death

The Charlemagne albums contains examples of: