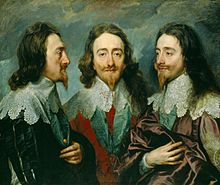 "A subject and a sovereign are clean different things."
“Charles the First was a king of England. He was what we call a ‘dickhead’ king.”
—Eddie Izzard
Advertisement:

Charles I (1600 – 1649) was the son of James I and the second king of Great Britain from The House of Stuart. Many who first saw him thought that he would be an improvement over his father.

How wrong they were.

His antagonism of Parliament & the Church of England and his mishandling of rebellions in Scotland and Ireland sparked the English Civil War which would end in his execution and the setting up of the Protectorate under Oliver Cromwell.

Charles was a man of good moral character, but his autocratic attitude, failure to understand politics, and lack of personal warmth made him a lot of enemies. He remains one of the most controversial and tragic figures in British history.

He is to date the last English or British monarch to ever set foot within the House of Commons. Notoriously, he led an armed guard to storm the House after it rejected his demands that Parliament turn over five members whom he had accused of treason over their plans to impeach his queen for plotting with fellow Catholics. The five members were pre-warned and had fled before the King and his troops arrived (leading the king to reportedly mutter the earliest recorded use of the phrase "All my birds are flown" upon seeing this), but this significantly damaged Charles's relationship with the people, suggested he was willing to turn to tyranny, and was a significant factor leading to the Civil War. To this day, the Monarch is barred from entering the Commons and, at the State Opening of Parliament, may only communicate via an emissary, "Black Rod", who initially has the doors slammed in his face as a symbolic reminder of Parliament's sovereignty.

The states of North & South Carolina were named after him ('Charles' in Latin is Carolus). Maryland is named after his queen Henrietta Maria (the story that this was a sly reference to the Virgin Mary by the province's Catholic proprietors is generally considered untrue).

Works related to Charles I: