France, officially known as the French Republic (French: République française), and its predecessors. For those who don't know, France is a Romance country in Western Europe, with non-Romance linguistic minorities living on the borders: Celtic Brittany, Allemanic Alsace and Lorraine (and a few other pockets), and some Basques in the extreme southwest (Iparralde). The name "France" comes from the Germanic Franks, who ruled the region formerly known to the Romans as Gallia ("Gaul" was, despite popular belief, not what Romans called the region), but the people living there were not, for the most part, ever Germans. Religiously speaking, a little over half the population regards itself as Catholics of some stripe, with the non-religious being the next largest group, and Muslims, Protestants, Jews, Buddhists, and all the others making up the rest. Keep in mind though, that since French law forbids ethnic or religious censuses, any figures bandied about are based on opinion studies and their results can vary wildly depending on the criteria − some studies put non-religious people as the majority, notably.

France is the fourth-most populated country and second-largest economy in Europe, second only to Germany itself, although the position of number two is sometimes contested between France and the UK. It is sometimes called "The Hexagon", because it is roughly hexagonal. France also has several oversea departments and territories all around the world, with the former (Martinique, Guadeloupe, French Guiana, Mayotte and Réunion Island) being considered an integral part of the country. La France Métropolitaine is the term most commonly used to refer to the parts of France within Europe. 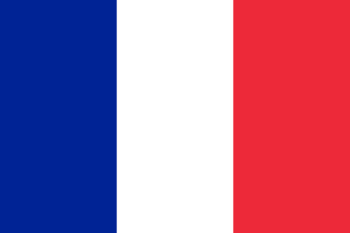 The Tricolor was conceived during The French Revolution, and its design and/or colors have since been copied by other countries undergoing revolution. Blue and red are traditional colors of Paris, associated with Saints Martin and Denis, Bishops of Tours and Paris, respectively; white was the color of the monarchy, Marquis De Lafayette added to (supposedly) symbolize the nation. It is also important to understand that Le Tricolore is Serious Business to the French people, even moreso than the symbolic importance assigned by most other nations to their flags.note For example, after the fall of Napoleon III, France again became a republic (this time permanently) despite wide popular support for monarchy at the time, almost entirely because the would-be heir (Henri, comte de Chambord) refused to take the throne unless the Tricolor was replaced by the royal family's old white fleur-de-lys banner. The French people wouldn't accept this, so it was decided to wait until the comte de Chambord died (the next in line, Philipp, comte de Paris, was fine with the Tricolor). But Henri lived for another decade, by which time monarchy had declined in popularity. Ironically, in his youth the comte de Chambord had himself designed a "Royal Tricolor" with a variation of the royal coat of arms in the center, but apparently got more stubborn and uncompromising with age.
National emblem of France 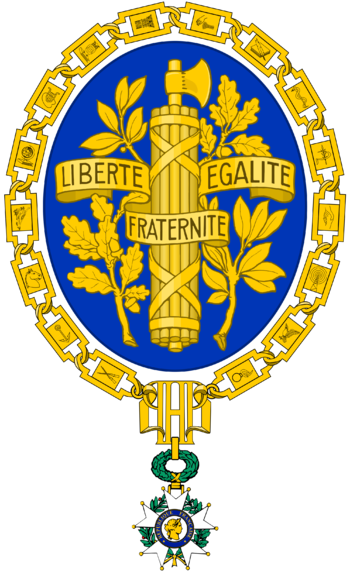 Let us go, children of the motherland,
The day of glory has come!
Against us, the tyranny's
bloody flag has been raised.
Bloody flag has been raised.
Can you hear in the countryside,
These ferocious soldiers bellowing?
They come all the way into your arms
To cut your sons and wives' throats!
To arms, citizens!
Form your batallions!
Let us march, let us march,
And let an impure blood flow into our furrows!

It was written by Claude Joseph Rouget de Lisle as a military song during the 1792 war against European royalists. The "impure blood" is a topic of controversy: one interpretation is that it designates the blood of the patriots who sacrifice themselves for freedom, opposed to the self-proclaimed "pure blood" of the nobles. Another, opposite one, is that it is the blood of the enemies and traitors who wanted to crush the revolution, "impure" meaning "treacherous" and "full of vice" in context. Historians rather favor the latter interpretation nowadays.

This is the first verse of seven (in the final version). Rest assured: they are all equally violent.

La Marseillaise is the national anthem of the French Republic.

La Marseillaise is the national anthem of the French Republic.