Saint Barthelemy, officially the Territorial collectivity of Saint-Barthélemy (French: Collectivité territoriale de Saint-Barthélemy), also known as Ouanalao to the natives, is a French overseas collectivity in the Caribbean. Like Saint Martin, Saint Barthelemy use to be a commune in Guadeloupe before seceding in 2003, and is part of the French West Indies. Like the rest of the French West Indies, it's part of the European Union and uses the Euro as it's currency.
Advertisement:

Saint Barthelemy is notable for formerly being the only Swedish colony in the Caribbean. The island, which was under British control at the time, was given to Sweden by King Louis XVI in 1784 in exchange for trade rights in Gothenburg. The capital and largest city, Gustavia, was declared a free port by the Swedes, which made it convenient for trading by the Europeans for goods, including contraband material. However, slavery was practiced in the territory under the "Ordinance concerning the Police of Slaves and free Coloured People" of 1787, with the slaves not being freed by the state until the 9th of October, 1847, and the freed slaves suffered economic hardships due to lack of employment opportunities as the island was not a plantation area. After the Saint Barthelemy status referendum in 1877, it was returned to France in 1878 and administered as part of Guadeloupe. 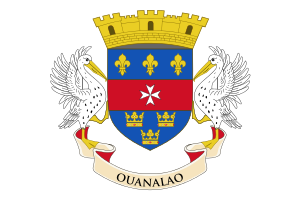 While the French tricolor is the official flag of Saint Barthelemy, this flag is also used on the island. It consists of the coat of arms of the island centered on a white field. The coat of arms consists of a shield flanked by two seagulls and divided into three horizontal stripes (parted per fess), three gold fleurs-de-lis on blue, above a white Maltese cross on red, over three gold crowns on blue, with a banner with "Ouanalao" below, and a mural crown on top of the shield. The fleurs-de-lis, Maltese Cross, and gold crowns are heraldic reminders of the island's history as a colony ruled by first the Kingdom of France, then the Knights Hospitaller and in turn the Kingdom of Sweden.
The French national anthem
Allons enfants de la patrie,
Le jour de gloire est arrivé!
Contre nous, de la tyrannie
Advertisement:
L'étendard sanglant est levé.
L'étendard sanglant est levé.
Entendez-vous dans les campagnes
Mugir ces féroces soldats?
Ils viennent jusque dans vos bras
Égorger vos fils et vos compagnes!
Aux armes, citoyens!
Formez vos bataillons!
Marchons, marchons,
Qu'un sang impur abreuve nos sillons!

Let us go, children of the motherland,
The day of glory has come!
Against us, the tyranny's
bloody flag has been raised.
Bloody flag has been raised.
Can you hear in the countryside,
These ferocious soldiers bellowing?
They come all the way into your arms
To cut your sons and wives' throats!
To arms, citizens!
Form your batallions!
Let us march, let us march,
And let an impure blood flow into our furrows!
Government Miscellaneous