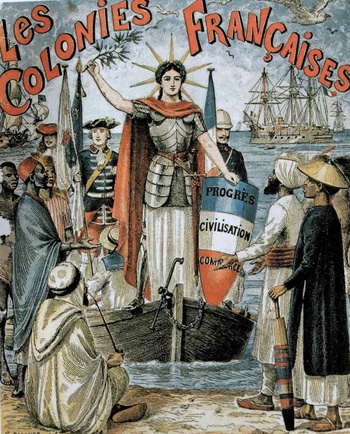 France's Colonial Empire existed from the 1600s to the 1960s, roughly the same length of time as The British Empire lasted. Many historians like to speak of at least two French Empires, the first one being the one that France largely lost in the Seven Years' War and The Napoleonic Wars (centering on North America), the second one being the colonies France acquired after 1815, especially in North and West Africa, Indochina and the Pacific. The French colonial empire's possessions included:

Many of these countries are part of the Francophonie, somewhat like the British Commonwealth. The French initially tried establishing a "French Union" by which the French state would be a federation of Metropolitan France and its former colonies, but this didn't sit well with either the colonized countries—who wanted nothing short of independence—and the bureaucrats of Paris (who were highly unfamiliar with the kind of decentralization this would require).

France has retained somewhat more minor colonies than Britain, but has directly integrated them into the core state rather than running them as separate dependencies. As a result, France is technically a transcontinental country that spans 12 timezones - the most of any country on Earth - and possesses the largest Exclusive Economical Zone. The largest of these overseas regions and/or territories are New Caledonia and French Guiana, the latter noted for being the site of the European Space Agency's launch site at Kourou (and for giving France its longest land border with Brazil of all places, surpassing Spain by a mere 3 kilometers). As of 2011 the French overseas departments have a combined population of 2,685,705 (in comparison the British Overseas Territories have a combined population of 260,000.).