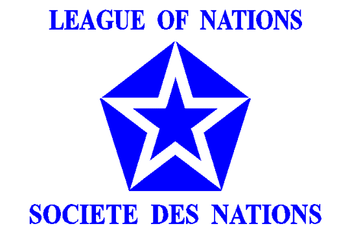 Once the hope for a new, peaceful world.
Advertisement:

Precursor to the United Nations, the League of Nations was formed after World War I to ensure peace and prevent World War II. Guess how it worked out.

The ideas behind the League represented a fundamental shift in thought from the preceding hundred years; rather than each nation pursuing their own national interests at the expense of others, the League brought in the concept of international co-operation. The League lacked its own armed force and so depended on the victorious Great Powers of the Great War: Great Britain, France, Italy and Japan to enforce its resolutions via military or economic pressure.

Despite the fact that the League was the brainchild of Woodrow Wilson, the U.S. never joined, much to Wilson's embarrassment. The main sticking point was Article X, which established collective security. Opponents, led by Senator Henry Cabot Lodge, believed this would undermine U.S. sovereignty, namely Congress's constitutional right to declare war. However, Wilson refused to compromise on Article X, which he saw as essential to guarantee world peace. This left Wilson and Congress at an impasse, resulting in the League going nowhere. Wilson's successor, Warren Harding, was opposed to the League, so any hope of U.S. membership died with his election. Naturally, the noninvolvement of the U.S. would lead to future problems for the League.

The League was structured under three main constitutional organs: the Assembly (all members of the League); the Council (the executive body of the League) and the Permanent Secretariat. These bodies would later be carried on to the United Nations.

The League successfully mediated a number of disputes, especially surrounding borders, the opium trade, and slavery. For example, there was a long-running argument between Sweden and Finland over the Åland Islands that had the two nations on the brink of war by 1920. Britain asked the League to intervene, and the agreement forged by the League in that dispute (that the islands would remain under Finnish control, but demilitarized) remains in force to this day. It was also successful in halting the use of slave labor on Libyan rubber plantations owned by Firestone. The Other Wiki has more information.

The concept of collective security and disarmament, central to the League's goals of peace, failed as the member nations were unwilling to disarm their militaries for varying reasons. Furthermore, as Those Wacky Nazis re-militarised their army and posed a threat to peace in Europe, the nations opted to follow suit.

You can see where this is going.