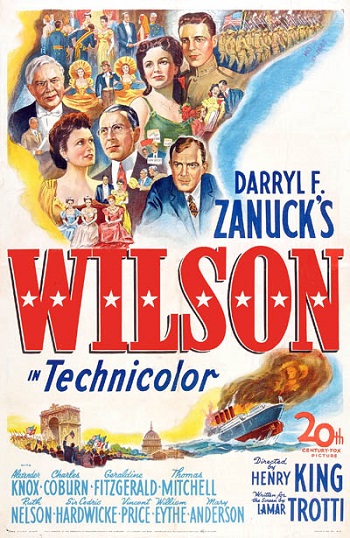 See if you can pick out Wilson.
Advertisement:

Wilson is a lavish 1944 Epic Movie directed by Henry King, about the political career of Woodrow Wilson, from his run for Governor of New Jersey through to the end of his Presidency. Wilson is played by Alexander Knox.

Released at the height of World War II, the movie is essentially propaganda for the war effort. We're clearly meant to see parallels between World War I and the then-current conflict, and between Wilson and Franklin D. Roosevelt (both being progressive Democrats, after all). At the end, Wilson's failed vision of a League of Nations including the U.S. is treated with a note of hope that it may be realized someday.

The movie was critically acclaimed, winning five Oscars, but was a Box Office Bomb. This really sucked because Wilson was the most expensive movie ever made at the time, beating the record set by Gone with the Wind. It also was very upsetting to producer Darryl F. Zanuck, who was a big fan of Woodrow Wilson and regarded the film as a pet project.

Not to be confused with the 2017 dramedy film Wilson adapted from the graphic novel by Daniel Clowes.

Example of:
Extra! Extra! Read All About It!