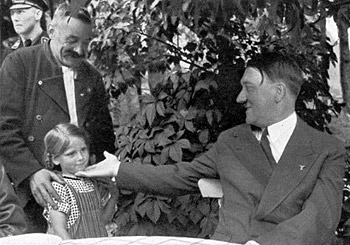 When you're in charge of the most infamous dictatorship of the 20th century, it's important to set aside plenty of time for PR.
Mayor Dewey: Another reason you should re-elect me, I love babies. Will you look at that, a baby! Gonna kiss it!
Steven: Hmm, I like his policies on babies.
Buck Dewey: Man, he never kisses me like that.
— Steven Universe, "Lars and the Cool Kids"
Advertisement:

When someone — usually a male someone — decides to run for public office, one of the things he is expected to do during the campaign is kiss the babies of female potential voters. Somehow this will prove that he's not evil and can be trusted to run the [country/state/county/city/dog pound] properly; presumably if he was evil, he'd be unable to resist the urge to take a bite out of it, or the baby would start crying loudly.

Subversions in which the baby is shaken, autographed, or otherwise mishandled by a confused candidate are common.

Exploited Trope of Friend to All Children. See also Photo Op with the Dog.