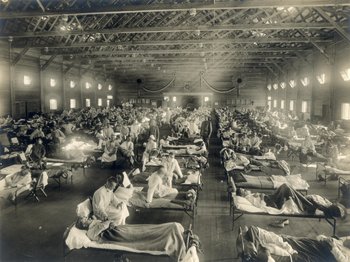 The Spanish Flu was a global pandemic that ravaged the world in the late 1910s, peaking in late 1918 as World War I was winding down. The pandemic is traditionally estimated to have killed about 50 million people, more than died in the war, and some estimates go as high as 100 million. Furthermore, it infected some 500 million people at a time when the world population was approximately 1.8 billion. To this day, it ranks as the largest and deadliest pandemic in human history.

The pandemic did not actually originate in Spain. Neutral Spain simply reported on it more honestly due to the lack of wartime censorship, creating the false impression that it was especially bad there. However, the name stuck. The actual origin of the pandemic is unknown to this day, although the most popular theories claim that it began in either China or the United States. The first known case was reported in Fort Riley, Kansas on March 4, 1918.

As you might imagine, influenza normally poses the greatest risk to children and the elderly. For reasons that are still not entirely clear, the Spanish Flu instead targeted healthy young adults. At the time, most doctors assumed that influenza was caused by bacteria. In fact, influenza is caused by viruses, but they were too small to see with the microscopes that were available in the 1910s. It is now known that the Spanish Flu was caused by the H1N1 virus, which was also responsible for the much smaller "swine flu" pandemic in 2009. While the 2009 strain was far less lethal than the 1918 strain, it nonetheless shared its proclivity for targeting healthy young adults.

Scientists are still not completely sure why the 1918 strain was so deadly, but one thing that certainly didn't help was that many people in leadership positions at the time saw this flu thing as a distraction from the all-important war effort. Infamously, Philadelphia held a massive Liberty Loan Parade, against the warnings of health officials, and ended up being one of the worst-hit cities in the U.S. As the disease spread across the world, leaders did take action sooner or later, often (tragically) later. Actions varied from place to place, but generally involved typical public health measures like instituting quarantines, banning public gatherings, and closing schools, churches, and many businesses. Many people wore face masks, and in some places, they were compulsory.

Given the purpose of this wiki, the Spanish Flu's impact on the nascent film industry is of particular relevance. Between California's ban on public gatherings preventing the shooting of crowd scenes and the shuttering of movie theaters eliminating the demand for new films, Hollywood ended up shutting down production for over a month in late 1918. At the time, most cinemas in the U.S. were independently owned, and the loss of months of revenue left many of their owners financially ruined. This enabled the major Hollywood studios, particularly Paramount under Adolph Zukor, to swoop in and purchase up those struggling independent theaters for peanuts. That gave the studios more control over distribution, paving the way for the studio system that would dominate The Golden Age of Hollywood.

No doubt due in part to the wartime censorship, the Spanish Flu has long been overshadowed by World War I. In older works set during the relevant time period, you'll be lucky if there's any mention at all that an apocalyptic influenza outbreak was going on at the same time as the war. This has been somewhat corrected in recent decades, and nowadays, the Spanish Flu will, at the very least, merit a token mention in most fiction about World War I. It also tends to be brought up as a comparison in works dealing with The Plague.