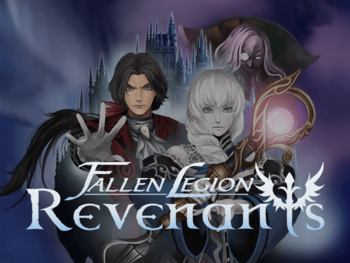 Fallen Legion Revenants is an Action JRPG Indie developed by Yummy Yummy Tummy and published by NIS America. Taking place in a fictional world, Inspired by… the events of the 1918 Pandemic, released in Feb 2021 for very ironic timing. The world is being devastated by a disease known as the Miasma, which starts as a slowly lethal respiratory disease but progresses into a mutating Zombie Plague. A colony of healthy survivors have taken shelter in the floating Welkin Castle, which was a former prison ruled by its Warden the Sorcerer Ivor.

The game features Dual Protagonists. Rowena is the titular Revenant, having been Ivor's right hand before being wrongly executed for treason. With her young son imprisoned and starved for her perceived crime, she can't move on, but initially cannot do anything either. A young member of Welkin's ruling council, Lucien, has found a way to contact her spirit and arm her with Legendary Living weapon spirits called Exemplars. Together they plan her revenge and the liberation of Welkin castle from Ivor's tyrannical and capricious rule. She and her party being spirits can travel the blighted country without fear of disease, while Lucien feeds her information and uses materials she sends back to him to gain favor with Welkin's populace to start a revolution.

This game is a sequel to YYT's earlier game, Fallen Legion, which was an evolution from their earlier mobile game Trigger Knight. Other than a few name drops and the mechanics of Exemplars, the games are independent as they take place 100s of years apart.

The game features a battle system that borrows the 1 button per party member combat from Valkyrie Profile, timed blocks from Super Mario RPG, the level design of Endless Running Game, and a light grid system in real time fights like Mega Man Battle Network. The art taking cues from 1920s fashion, Odin Sphere, and Castlevania. It also has a series of choices Lucien must navigate similar to a visual novel like Telltale Games.