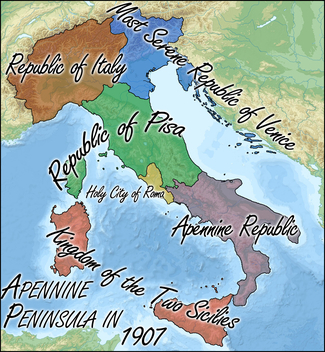 In Alternate History and Speculative Fiction (especially the kind that takes place 20 Minutes into the Future), authors like to have fun by turning big countries into lots of smaller ones. May be justified by a war, a large-scale catastrophe, or simply a successful secessionist movement. Often happens with the United States of America, resulting in the Divided States of America, but other large countries such as China or Russia are also considered fair game.

May result in a Vestigial Empire, if the former country continues to exist in a much smaller capacity. Contrast Space-Filling Empire, which is about filling the map with large countries so as not to bother with pesky borders. Also see United Europe, Expanded States of America, and Middle Eastern Coalition as other examples of counterparts, where different countries link up or expand into huge regional or continental polities.