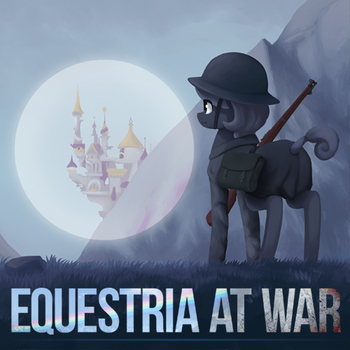 "To Twilight it's numbers in the paper, to Cadance it's the letters from her husband, to Luna it's guns and tanks. But to me, it's my little ponies."
— Princess Celestia, Equestria at War
Advertisement:

Released in July 2017, Equestria at War has grown to be one of the most comprehensive mods for HOI4. With a custom-made map, 60+ countries with 30+ unique focus trees, racial tech trees and units, a huge variety of complex interweaving events, and more custom icons and portraits than the entire base game, it shouldn't exist, but it somehow does.

It can be downloaded on the Steam Workshop

and has two wikis available in English

, is no longer officially supported by the mod developers.

It is 7 years since Princess Luna was saved and the Elements of Harmony restored by Princess Twilight and her friends. The world is changing. The peaceful isolation of the village and farm under a distant monarch is giving way to a new world, with radical ideas, terrifying weapons, centralised nation states and industrialised cities.

Already Equestria has suffered invasions, coup attempts, a rogue demigod, and even near annihilation at the hands of stolen time travel magic. A long awaited commission has released a scathing report condemning the Canterlot administration of gross unpreparedness for military, magical and internal threats.

Everywhere Equestria finds new challenges. To the west, Queen Chrysalis has abandoned her attempts at infiltration and instead mobilised the Changeling Hives for industry and war, planning her revenge on Equestria. To the north, the Crystal Empire, returned after centuries in limbo, considers its future in this strange world even as the threat of Sombra's return remains ever present. Communists spread radical ideas in Stalliongrad to the east, and the griffons of the north are thrown into chaos by the assassination of their governor.

Across the sea, things are even worse. The Griffonian Empire has collapsed after centuries of decaying stability, and millions lie dead as lords, kings and revolutionaries rush to fight over the spoils. The vulnerable ponies of the colony of New Mareland find Equestria more distant than ever. In the cursed north, the Necromancers of the Dread League stir to battle the Holy Knights of the Arcturian Order. And in the far east the ponies of the disparate nations of the River Coalition face this dangerous world with no alicorns, no harmony, no advanced technology, wielding only the grim determination of those who fight to protect their home and lives.

Beyond the southern seas of the aforementioned continents, the continent of Zebrica is undergoing a massive power vacuum in the wake of the Storm King's death. The entire continent is reduced to a giant pit of warfare, as the nations that were pillaged by the fallen warlord are now taking this chance to reclaim their lost glory. Hippogriffia is constantly balancing between their people's lives between the sky and sea with risks of civil strife and much worse. Nightmare Moon's followers are awaiting the day of their monarch's return by forming Chiropterra to one day retake Equestria. Colthage is under the thumb of the nation's criminal underbelly. The lands where the Storm King hailed from have now broken into warring states, vying to be his successor.

In this modern world of danger and impending war, the Magic of Friendship can seem very distant indeed...

Equestria at War contains examples of: