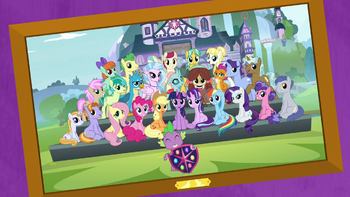 Friendship is magic... and school is cool!
Twilight Sparkle: Guess what? The School of Friendship is back in business!
Rainbow Dash: What?!
Rarity: But why?
Fluttershy: Oh no.
Applejack: Bad idea.
Pinkie Pie: Do we still get to guess?
Written by Michael Vogel & Nicole Dubuc
Advertisement:

With her School of Friendship closed, Twilight Sparkle enters a deep depression that not even her friends can break. She goes for a walk to try to think about what went wrong when Starlight Glimmer approaches her. Starlight tells Twilight that the reason things went bad for the school was because Twilight was trying to follow the Equestria Education Association (EEA)'s rules despite the school being unlike any other, and that she gave up too easily when Neighsay challenged her. Knocking the EEA rulebook into the water, Starlight convinces Twilight that she doesn't have to open up a school for education, but a school for friendship, and she can make her own rules about that as the EEA has no power to tell her how to do her job as Princess of Friendship. Twilight agrees, but knows that she needs to bring back the non-pony students to the school to make it work. Her friends offer to go to the various lands to request the students come back while Twilight and Starlight prepare for reopening the school. But when they get to the various guardians, they discover all the students have gone missing.

The various guardians come to Canterlot to demand answers, and with tensions high between the species, Celestia urges Twilight to find the missing students before war breaks out. Regrouping back at Sugarcube Corner, Twilight and her friends try to figure out where the students might have gone, knowing that they had become friends. At that moment, Sandbar comes in collecting a large order of cupcakes. The Mane Six realize that Sandbar is likely getting goods to bring to his friends, and they follow him, finding that they have been hiding at the Castle of the Two Sisters. However, their antics have brought a pack of pukwudgies, who are attacking the students with their needles. The Mane Six quickly dispatch the pukwudgies and rescue the students, who gain more respect realizing these are the heroes of Equestria. They agree to come back to the school.

With all the students collected, and Celestia and the guardians from the various species having arrived, Twilight breaks the magic seal, officially reopening the school. However, Chancellor Neighsay emerges from a portal where the lock once was to demand answers, still refusing anypony entry to the school due to his final decision. He again reiterates that the school is not accredited and the non-pony students are dangerous, but Twilight insists that this will be a school of friendship and doesn't have to follow the EEA rules. With little to argue against, Neighsay leaves in a huff, still blindly convinced that Twilight's school would bring ruin to Equestria. The students are able to convince their guardians to let them keep learning friendship, who all more or less agree, thus restoring their own friendships and alliances in the process, and a new school session starts, but without the rigors of the EEA rules, with each of Twilight's friends handling their lessons in their own way.

Twilight falls into a deep depressive state after the School of Friendship is closed.

Twilight falls into a deep depressive state after the School of Friendship is closed.