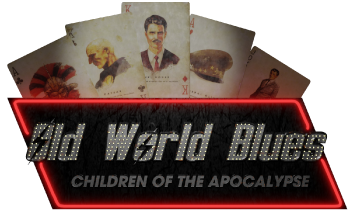 Old World Blues is a popular Hearts of Iron IV Game Mod set in the Fallout universe, or rather, an alternate universe version of it. The player can play as any of the West Coast factions in addition to a plethora of original ones. Not only that, every major faction has options that the player can take to radically alter their directions, like turning Caesar's Legion into an actual nation-state or turning the NCR into an oligarchic dictatorship in all but name. Many of the game systems have been overhauled to better reflect the post-apocalypse nature of the setting.

The setting itself and the scale of the conflict also result in a very different map (not just because it only covers North and Central America instead of the whole world). While Vanilla HoI4 worldmap consists in several landmasses, no rivers, large seas, many islands, insular nations, and countries of various sizes distributed on all those lands, Old World Blues consists in a single landmass occupied by a hundreds of tiny countries all sharing borders with several others (there's literally two island nations, both minor), while rivers are treated as seas, allowing landings and naval battles in many places beside the Pacific ocean. Since the diplomatic AI is more aggressive, the new map layout forces the player to be more cautious.

The current version features the entirety of the West Coast (including Canada), Southwest, Northwest, Texas, and Mexico. The developers have plans to make the entire map playable, with areas not covered by any game being given original lore and factions.

The current version offers three starting scenarios, West Coast, Mexico, and Texas, though in practice it's exactly the same campaign (it only affects the suggested majors at the country selection screen).

Compare this with Fallout Pre-War, which is set before the Great War. See also Balefire Blues, a submod and crossover with another famous HOI4 mod, Equestria at War.