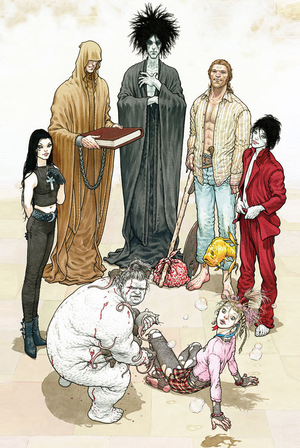 The Endless, going clockwise starting left: Death, Destiny, Dream, Destruction, Desire, Delirium, and Despair.
Time started to spin.
Space began to expand.
From itself again, three living things
the Original One did make.
The two beings wished, and from them,
matter came to be.
The three living things wished, and
from them, spirit came to be.
The world created, the Original One
took to unyielding sleep...
— The Original Story, Pokémon
Advertisement:

In Speculative Fiction, especially Fantasy, one way of distinguishing your fantasy world from another is to populate it with made-up gods.

Real-world theology aside, unless the story involves An Aesop about religion being the opiate of the masses or the tool of corrupt priests, it is popular (but not necessary) for the gods in a fictional world to really exist In-Universe. This can serve many uses for the author:

Roughly 9 times out of 10 note and remember, 68% of all statistics are made up on the spot, the Fantasy Pantheon will be polytheistic and each god and goddess will have an Anthropomorphic Personification. Being a Flat-Earth Atheist is a potentially dangerous prospect. Non-godly spirits, demons and ordinary magical beings don't count, but various lesser gods, demigods and Odd Job Gods do. Note that while the title says "pantheon", single Gods count too, but they are rarer.

Interestingly, and possibly because of the non-polytheistic background of most sci-fi and fantasy writers, fantasy religions tend to be far more inclined to Henotheism

than most real-world polytheisms. Expect fantasy characters to pick one deity and stick to them rather than worship whichever holds the portfolio most appropriate to the business of the moment.

Of course it's also plausible that a work's fantasy pantheon is never even encountered, or perhaps they may or not be real.

The gods might also not even be the most powerful beings in their universe. Eldritch Abominations, the Powers That Be, or perhaps even the occasional mortal can be more powerful than them.

This trope is the basis of any good Mythopoeia.

Compare Crossover Cosmology, All Myths Are True, Crystal Dragon Jesus. May overlap with Original Generation, if they co-exist with pantheon from actual mythology.

Expect some incidence of Physical Religion. See Stock Gods for the typical structure and common inhabitants of a Fantasy Pantheon.

Terrible Writing Advice makes his pantheon out of a bunch of commonly used godly archetypes.

Terrible Writing Advice makes his pantheon out of a bunch of commonly used godly archetypes.