Literature / The Deed of Paksenarrion 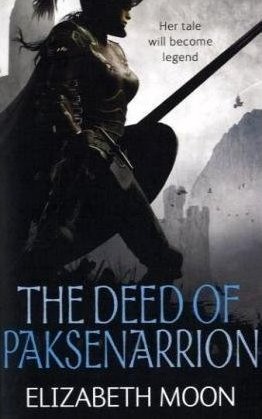 Action Girl. Well, yes.
"In a sheepfarmer's low stone house, high in the hills above Three Firs, two swords hang now above the mantelpiece. [...] The other is a very different matter: long and straight, keen-edged, of the finest sword-steel, silvery and glinting blue even in yellow firelight. The pommel's knot design is centered with the deeply graven seal of St. Gird; the cross-hilts are gracefully shaped and chased in gold.
[Old Dorthan reminds his grandchildren] of the day a stranger rode up, robed and mantled in white, an old man with thin silver hair, and handed down the box [with a scroll] and the sword, naked as it hangs now.
"Keep these," the stranger said, "in memory of your daughter Paksenarrion. She wishes you to have them and has no need of them." And though he accepted water from their well, he would say no more of Paksenarrion, whether she lived or lay buried far away, whether she would return or no.
The scroll Dorthan reads is headed The Deed of Paksenarrion Dorthansdotter of Three Firs, and many are the tales of courage and adventure written therein."
— Prologue, Sheepfarmer's Daughter
Advertisement:

The first series written by Elizabeth Moon first released in 1988, a work of Heroic Fantasy divided into three books:

All three books are available in a compiled omnibus edition. Moon would later write a pair of prequel books about Gird himself, Surrender None and Liar's Oath, collectively titled The Legacy Of Gird. A second series of a projected five books, set after The Deed of Paksenarrion and entitled Paladin's Legacy is also in progress. Oath of Fealty, Kings of the North, Echoes of Betrayal (formerly announced as Crisis of Vision) and Limits of Power have already been published.

The inspiration to write Paks allegedly came from Moon watching people play paladins in Dungeons & Dragons and deciding "such a person wouldn't act like that" - perhaps the players in question were playing their characters as Lawful Stupid, something the book averts tremendously.