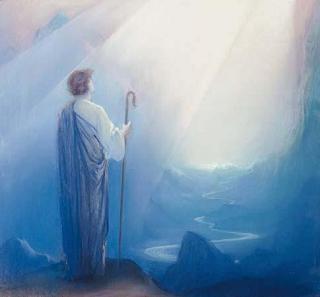 Insert Ethereal Choir for added effect.
"Then God said, 'Let there be light'; and there was light. And God saw the light, that it was good."
— Genesis 1:3-4, The Bible
Advertisement:

It's one of the deepest ideas in our collective (un)consciousness. The Sun brings heat, makes plants grow, helps us wake, explore, work, create. Gods of the Sun and Moon are associated with law, arts, the mind, justice, protection, inspiration, all the things that make up the best part of being human. (And even the other nice thing about being human gets this treatment — Venus is, after all, the Morning Star.note In turn, that was a trait acquired from Proto-Indo-European dawn goddesses, whose derivations still are associated with love in known mythologies.) The light bulb coming on over one's head is the genesis of a great idea. By light we can see the world; by extension, light lets us confront evil and destroy it, both within and without ourselves.

It's the more or less obvious conclusion.

Almost every RPG does this, some more than others. (It's always the holy magic that heals, never the dark.) For characters with light-based powers with this connotation, see Light 'em Up. Holy Hand Grenade is not out of the question.

The corollary, of course, are Dark Is Evil and its sub-tropes. Light Is Not Good originated as a subversion of this trope. Note, however, that Good Is Not Nice can also come into play if said hero has an affinity for light, and both Light is Good and Light Is Not Good may come into play, as a Hypocrite tries to pose as a good guy by taking on the trappings suitable for the good guys. If a story wants to use Light is Good and Dark Is Not Evil at the same time, it's generally justified as both forces being necessary for a truly stable and peaceful world, with the perceived 'evil' of darkness being a misunderstanding between the sides. See Light/Darkness Juxtaposition.

Why having the sun appear is good. Also the reason White Magic is called that. Related to Heaven Above, since the sky and the light-bearing suns often go hand-in-hand when depicting the good God. This trope's relationship with the sun can often lend it to be used similarly to Rays from Heaven, Cue the Sun, and Watching the Sunset. See also Holy Halo, Shining City, and Shining Goodness.

For more chromatic inspiration, see Color-Coded for Your Convenience. For light used as one of the Elemental Powers, see Light 'em Up.

Daylight Horror and Light Is Not Good are subversions of this trope.

Daggeron is the Solaris Knight, a wizard with the power of the sun that fights the forces of darkness.

Daggeron is the Solaris Knight, a wizard with the power of the sun that fights the forces of darkness.