Film / Stations of the Cross 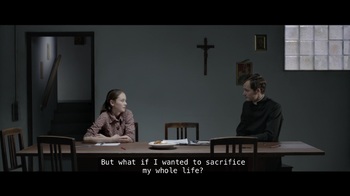 Well, this can only end well.
"The film is not an attack on faith or religion, but an examination of how faith goes wrong."
—Steven D. Greydanus

Stations of the Cross is a German language film with fourteen shots, one per scene, with each one paralleling a Station of the Crossnote 1. Jesus is condemned to death. 2. Jesus carries the Cross 3. Jesus falls for the first time 4. Jesus encounters his mother. 5. Simon of Cyrene helps Jesus to carry the Cross. 6. Veronica wipes the face of Jesus. 7. Jesus falls for the second time 8. Jesus meets the three women of Jerusalem 9. Jesus falls for the third time. 10. Jesus is stripped of his clothing. 11. Jesus is nailed to the Cross. 12. Jesus dies on the Cross. 13. Jesus is taken down from the Cross. 14. Jesus is placed in the tomb.. The protagonist here is not Jesus, but Maria, a girl haunted by thoughts of sin and self-hatred as a result of her upbringing by her oppressive mother and the fundamentalist (and fictional) Priestly Society of St. Paul.

Anyone who knows how Jesus ends up in The Four Gospels has an idea where Maria's story is going, but the rather loose connection between each scene and each station, along with the film's subversion of religious imagery, makes it interesting to look at in the context of the tropes of religious life and cultural change.

Stations of the Cross provides examples of: